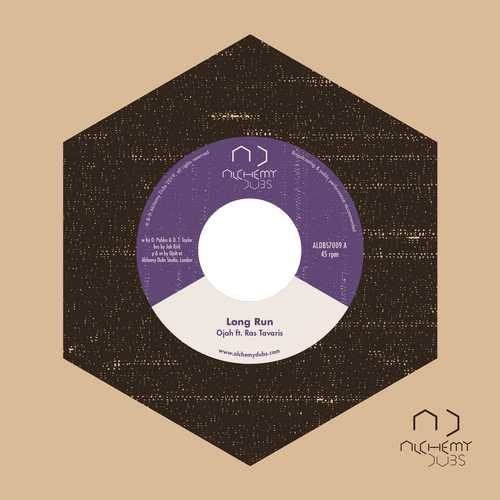 Out of the London-based Alchemy Dubs Studio comes a brand new effort for which producer/engineer Oscar ‘Ojah’ Pablos collaborated with Jamaican singer Ras Tavaris. With this ninth release on 7” vinyl format, the ever interesting Alchemy Dubs imprint adds another noteworthy release to its steadily growing catalogue. Four of the nine released 7″ singles feature instrumentals and dubs, while the other vinyl platters also include vocal efforts from a nice mixture of more widely known and rather unknown vocalists from different countries including Spain (Hada Guldris aka Suka), the UK (Rider Shafique and Paul Fox), the USA (Fikir Amlak) and Jamaica (Ras Tavaris).

Backed by an appealing Steppers riddim, Ras Tavaris delivers a compelling modern roots piece entitled “Long Run”. Because there’s nothing really special about the singer’s vocal delivery, the real power here are the music and the important lyrics for these times of fast changes and short-term views. Anyway, all in all the vocal cut sounds very nice and can be qualified as a decent effort. However, the greatest listening experience comes from the downright magical “Dub Run”, a real scorcher on the flipside which probably will get more spins than the vocal side.

This release is a limited edition of 500 copies, hand-stamped and hand-numbered, served in a thick custom reversed kraftliner sleeve with graphic design by Victor Castro.

Worth adding to your vinyl collection!