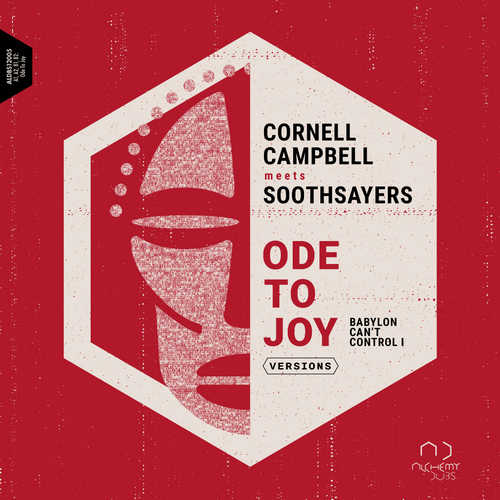 The early 2011 started collaboration between Brixton-based hybrid collective named Soothsayers, led by trumpeter Robin Hopcraft and saxophonist Idris Rahman, and one of Jamaica’s most distintive voices, Cornell Campbell aka Don Cornel or Don Gorgon, led to the 2013 released “Nothing Can Stop Us”, a superb collection of tunes that not only got critical acclaim but also became part of many reggae fans’ collection.

In 2018, Riddim Chango Record released a four track remix EP on 12″ vinyl, versioning, in good Jamaican tradition, the track “Jah Jah Me No Born Yah” from the “Nothing Can Stop Us” album. And now, about a year and a half later there’s the next 12″ vinyl platter (coming in a limited edition of 600 copies) with four new versions of another track taken from that album. This time it’s “Ode To Joy (Babylon Can’t Control I)”, which is issued by the ever reliable Alchemy Dubs label. The four versions are remixes and new dub mixes done by Osaka-based engineer and dub master Ruv Bytes and Alchemy Dubs’ own Oscar ‘Ojah’ Pablos.

For this project, Haruyasu “Big H” Kudoh and Ras Kanto from Japan overdubbed traditional Japanese instruments (Nagoya harp, a series of wooden temple blocks, or mokugyo, along with temple bells) onto the original reggae riddim. The final result is ear candy for openminded reggae fans and music lovers alike. There’s, of course, Cornell Campbell’s sweet falsetto soaring as majestically as so often heard on the many gems he has given us since he started his career with the Eternals. And furthermore there’s the musical backdrop, which in all versions feastured here turns out to be a wicked weapon.

Great stuff… not to be missed!!