Dukey McCalla – I’ve Got The Power

Dukey McCalla – I’ve Got The Power 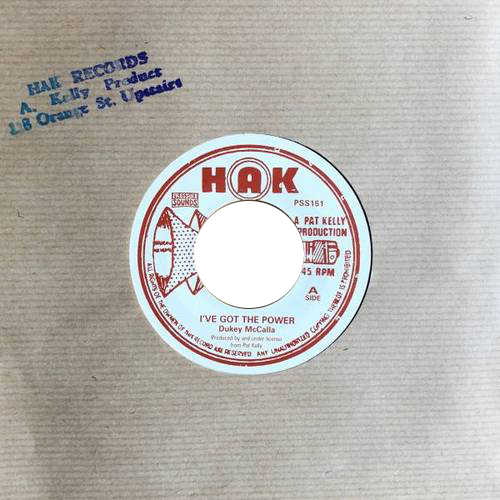 Always thinking of Ray Hurford’s saying “Reggae has more mystery than history!” when coming across notheworthy music recorded way back by an obscure Jamaican artist, seemingly only known by a very small group of reggae fanatics who are always determined to find out more detailed information about such an artist.

One of those artists is the singer Dukey McCalla. His single “I’ve Got The Power”, produced by Pat Kelly and originally released as an extremely limited pressing in 1970, has become a cult favorite, shrouded in mystery and rumour, among serious record collectors and reggae selectors. The plaintive harmonies and the early, roots-inflected militancy of the lyrics of “I’ve Got The Power” made many, usually well-informed reggae fans, think that Dukey McCalla was in fact The Wailers operating under an alias. An interesting and obvious thought, however it definitely weren’t the Wailers who recorded this tune, but Pat Kelly (for whatsoever reason singing under the alias Dukey McCalla) along with Wesley Tinglin of The Viceroys on the soaring harmonies.

Pressure Sounds has done a good job by re-releasing “I’ve Got The Power” on 7″ vinyl for the first time, lifting the veil to one of the toughest and unique tunes of Pat Kelly’s career. If you turn over to the “I’ve Got The Power Version” on the flipside, you’ll hear the singer coming up with a little DJ vibes in the spoken intro.

Mystery solved… but still a few questions left to be answered.