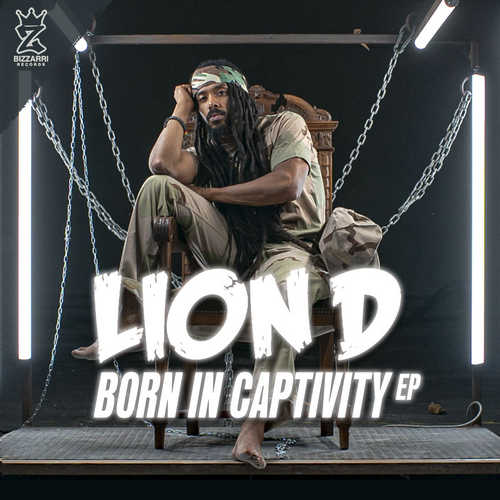 About 4 and a half years after the release of his fourth full length album, the Alborosie produced and recorded excellent “Heartical Soul”, Italy-based reggae singer Lion D returns with a new EP titled “Born In Captivity”. Just like his previous albums “The Burnin’ Melody” (2009), “Reap What You Sow” (2011), “Bring Back The Vibes” (2013), and “Heartical Soul” (2015), this long overdue follow-up collection of tunes is released by independent Italian record label Bizzarri Records.

“Born In Captivity” gathers five reggae tracks consisting of three singles – “System Failure”, “Eyez Wide Open”, and “Proud” – produced by Leo Bizzarri and played by Lion D’s own The Livity Band, which were released in 2019, and two brand new singles, the Reggie Beatz produced ganja piece “Puff My Sensi” and the Paolo Baldini produced “Queen Of The Dancefloor”, the latter coming across a riddim played by Mellow Mood.

Lion D was, and still is, one of the most naturally gifted artists around. This said, it’s obvious that a new Lion D release is a real pleasure to listen to as not only his style is very interesting, but also his captivating mix of sounds. On previous releases Lion D had a lot to say, and this 5-track EP is no exception. “System Failure”, is, essentially, a social commentary and a delightful one. Along with carrying a significant and poignant message, the composition is dynamic and entertaining throughout. An excellent way to start this collection. Though less immediately pleasing, “Queen Of The Dancefloor” definitely should be given a little time to become more appreciated. “Eyez Open Wide” is one of the biggest tunes featured here and another lyrical interest. Very nice and inspirational vibes come with “Proud”, a meaningful song which, together with “Eyez Open Wide”, is one of the highlights. The tasty “Puff My Sensi”, done in collaboration with South African producer Reggie Beatz, is a real fine closer of this EP.

“Born In Captivity” displays the potential of this fine artist once again.