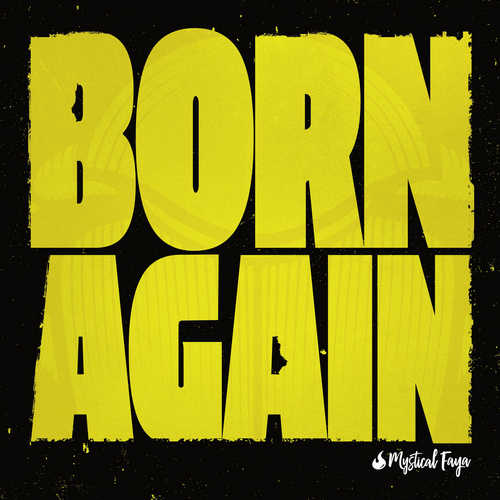 Formed in 2007, the six-piece French band Mystical Faya is strongly inspired by Jamaican and English reggae from the ’70s/’80s. The music they offer is reggae tinged with soul and dotted with rock keys, but above all ear-catching is their exceptional lead vocal accompanied by nice and appealing choruses as well as their energetic and haunting melodies.

Almost one year after the release of aside project called “Chill Sessions”, in which Mystical Faya showed their ability to transport the listener to other musical spheres (soul, funk, electro, jazz…) they return with a brand new EP entitled “Born Again”, which is in line with the band’s first two reggae albums “Never Give Up” (2013) and “Sleeping Souls” (2016).

The EP contains 5 exclusive tracks, a mixture of digital sounds, roots, down tempo and rub-a-dub, as well as 2 dub versions plus the huge bonus track “Jah Never Fail”, a collaboration with Jamaican singer Derajah (Inna De Yard) which was already released in November 2017. Besides Derajah, this EP also features a guest appearance by the New Caledonian singer Marcus Gad alongside the brass section led by Tribuman on the solid “Confusion”, a call to the gathering and to the awareness of the oppression, the drifts of the system and the ecological situation.

The opener, “What Goes Around”, is an incisive and catchy rub-a-dub that leads us to reflect on causality, the boomerang effect, our responsibility and the consequences of our actions. Next comes the uplifting “Born Again” on a dynamic riddim that mixes reggae with a bit of soul. Then there’s “Youthman”, a modern rub-a-dub piece with catchy riddim, inviting the youth not to trust appearances, to look at things from different perspectives before making a judgement. Simply beautiful is “Simplicity” across a slow-paced riddim, by far the most rootsy song included on this EP. While “Dub Comes Around” is more in the tradition of the original dub music, “Dub Got No Objection” goes outside the usual dub territory due to the addition of synthesizers and samples (from the movie “Usual Suspects”).