Pat Kelly – Striving For The Right

Pat Kelly – Striving For The Right 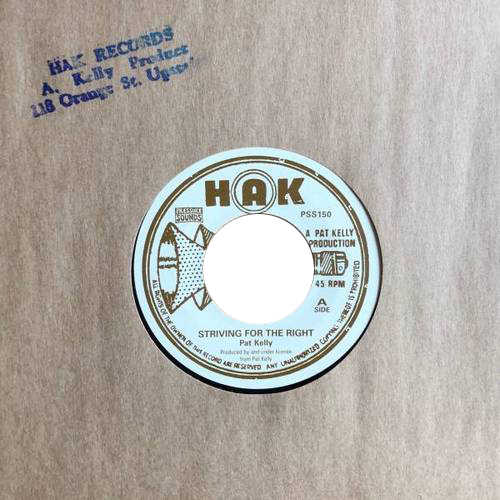 Blessed with perfect pitch and an angelic tone, the earlier this year passed away Jamaican veteran singer & producer Pat Kelly was originally trained as a sound engineer (he worked for King Tubby’s Studio and Channel One Recording Studio in the 1970s). He turned to singing, in his own words, “more for fun” than a serious career move and became lead singer of The Techniques in 1966, replacing Slim Smith, which he left in 1969 to embark on a solo career.

Now Pressure Sounds has simultanuously reissued two Pat Kelly singles, both initially released in 1970 on the HAK label, named after Kelly’s initials – Horatious Adolphus “Pat” Kelly. This was his Jamaican imprint, releasing a handful of self productions in miniscule runs including the aspirational “Striving For The Right” with its tender b-side “When A Boy Falls In Love”. This double A-sided single represents the first time that these two wonderful tracks have been reissued with the original label design.

“Striving For the Right” finds Pat Kelly in perfect form, his lovely soulful voice maintaining perfect clarity while blossoming with emotional intensity over a chugging organ led instrumental. “When A Boy Falls In Love” is a keening near-ballad that has all the hallmarks of classic R&B records of the time. Both tracks showcase the rich and complex vocals from a captivating singer who was also known as a vocalist who could clone Curtis Mayfield’s voice better than anyone else.