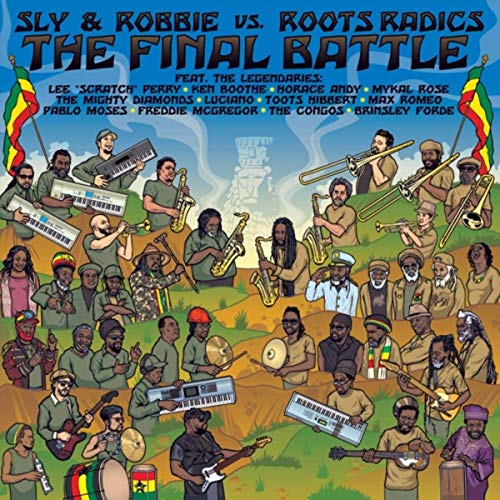 One of South America’s most audacious and respected percussionists, Hernan Sforzini, came up with the idea to collaborate with Sly & Robbie and the remaining members of the 1980s quintessential studio band, the Roots Radics. Each would record brand new riddims and then add legendary singers composing original lyrics to make an album. He recorded the songs in his Afro Studio in Buenos Aires, together with Bob Marley’s Kingston-based Tuff Gong studio.

The album title brings up the suggestion that this a sort of clash between the two legendary riddim machines. Exactly the opposite is true. It is a friendly musical event in which several reggae veterans deliver their tunes under the guidance of Jamaica’s illustrious backing bands. Don’t expect exciting musical excursions, those days are gone. It’s an album with lush arrangements, embedded in what is familiar and proven in reggae music and with a tendency towards Big People Music.

Album opener This Morning sees Michael Rose teaming up with the backing band from his Black Uhuru days. The result is one of the best tunes on this album, militant and lyrically relevant. Aswad’s Brinsley Forde warns you about those who are looking to deceive and abuse you. The uptempo backing by the Roots Radics makes this an highlight on this album. The melancholic sound of The Mighty Diamonds’ lovers tune Change My Mind makes one believe this was recorded somewhere in the early 1980s. Freddie McGregor seldom fails to make a decent impression. His praising tune Glory is no exception to this rule. Max Romeo’s song The Gates Of Hell sees the veteran performing an above-average tune.

Luciano’s funk reggae isn’t our cup of tea and Ken Boothe follows in the footsteps of Julie Covington with Argentina. After spinning the tunes by Horace Andy and Pablo Moses we have to conclude that both singers have delivered far better tunes in the past. Lee Perry should have retired as a vocalist many years ago. The backdrop of his echo-drenched song Full Moon Plant A Tree is near perfect, but we would have preferred a real singer to voice this riddim. The efforts of both The Congos as well as Toots & Maytals aren’t very impressive. Here, the vocal performance of their songs isn’t what it’s used to be.

An ambitious project with very experienced and gifted musicians, but unfortunately the final result has a few weak moments.