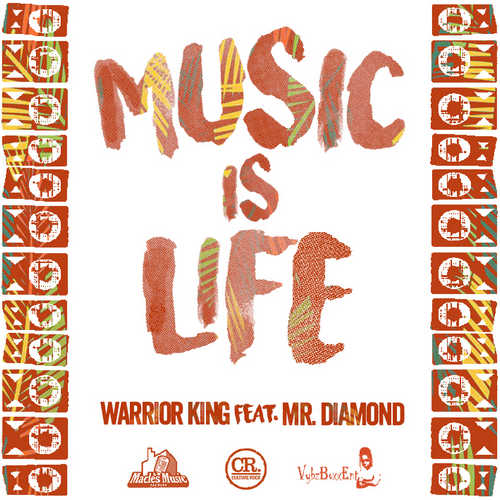 After previously having collaborated with Culture Rock Records on projects such as the “Waiting Riddim”, “Progression Riddim”, “Change Like Weather Riddim” and Verse iTal’s “Truth & Substance EP”, Belgian musician, producer and audio engineer MacLes and the Dusseldorf, Germany-based record label have worked together once more. Furthermore involved in this new project is Mr. Diamond’s Vybz Boxx Entertainment. This resulted in the release of a brand new single by Warrior King feat. Mr. Diamond called “Music Is Life”.

Mark Dyer aka Warrior King from out of Clarendon established his name in the early years of the new millennium on the strength of a few very successful tunes, in particular “Virtuous Woman” and “Never Go Where Pagans Go”. In recent years UK-based, Jamaica-born reggae/dancehall artist Mr. Diamond has created some real buzz, which led to him becoming part of Busy Signal’s Turf team in 2015 and the release of his hit single “This Time”.

Flavorful live instrumentation underpins to vocal delivery of both artists, whose voices blend very well together. Mr. Diamond perfectly compliments Warrior King’s vibrant and beautiful style. “Music Is Life”, a title that speaks for itself, has a very fresh vibe to it and a nice sonic appeal throughout.

All in all a lovely tune to listen to.