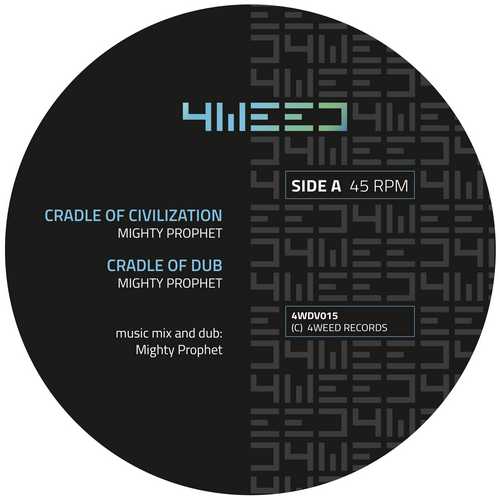 Since their emergence in 2009, the ever expanding independent record label, studio, and creative communication agency 4Weed Music from Italy, has been focusing on sound system and bass music. After Dub Disciple’s early October released 4-track EP “Dub Ritual”, it didn’t take the label that long to unleash a new 12″ single. This vinyl platter features tracks from Higher Regions’ boss Mighty Prophet from Italy and the young and highly talented Baodub outta Valencia, Spain.

Side A displays Mighty Prophet’s hi-quality dub producer’s skills with first the heavyweight instrumental “Cradle Of Civilization”, which is followed by its powerful dub version titled “Cradle Of Dub”. Both tracks have great appeal due to their meditative melodies and spacey arrangements. Played by the mighty King Shiloh as last tune in many dances, both “Cradle Of Civilization” and its dubbed out version fit perfectly well in any heavy dubwise selection! Something different can be heard on the B-Side, which features two efforts from Baodub, a Spain-based producer and DJ who originally comes from Poznan, Poland. His first tune, “Subhit”, was released in 2014 by Pistolero Recordings. Although influenced by Sound System culture, he always tries to get some psychedelic feeling in his music. His tracks, “Echo Cave” and “Dub Cave”, have an incredibly potent sub-line, combining tribal percussions, ancestral echoes and superb drum work, which creates an energetic vibe.

If you’re into sound system culture, you’ll have to check this platter!