Singing Cologne – Just For A While

Singing Cologne – Just For A While 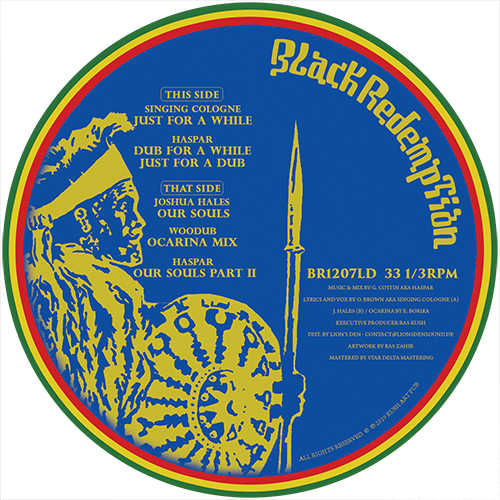 So far the collaboration between Ras Kush’s Black Redemption, the Brooklyn-based record label with a roots & dub focus, and Ras Lion’s Berlin-based Lion’s Den has led to some very interesting releases, especially for those interested in the kind of music that is played at roots dances. Also this platter is a noteworthy Black Redemption release, which besides showcasing the talent of producer and dubmaster Haspar from Grenoble, France, also displays the vocal and lyrical prowesses of singers Singing Cologne from Jamaica and Joshua Hales from the US. Furthermore there’s a track featuring Woodub from Brussels, Belgium, who plays an exceptional Italian woodwind instrument named ocarina – a type of vessel flute.

On Side A the listener is treated to an energetic driving digi-steppers riddim with on top the classic voice of Singing Cologne who reminds us that all things are “Just For A While”. Next comes Haspar with two awesome dub excursions, which will surely thrill those who are regular visitors of events featuring custom built roots & dub sound systems. Side B offers a deep combination with Joshua Hales from the US on vocals, speaking out against babylon’s rule and making it very clear that “Our Souls” were never for sale. Before Haspar serves us well with a decent dubbed out effort called “Our Souls Part II”, it’s Woodub’s beautiful sounding “Ocarina Mix” that leaves a serious impression.