The Circle Of Confusion feat. Cornell Campbell – Yesterday Was History

The Circle Of Confusion feat. Cornell Campbell – Yesterday Was History 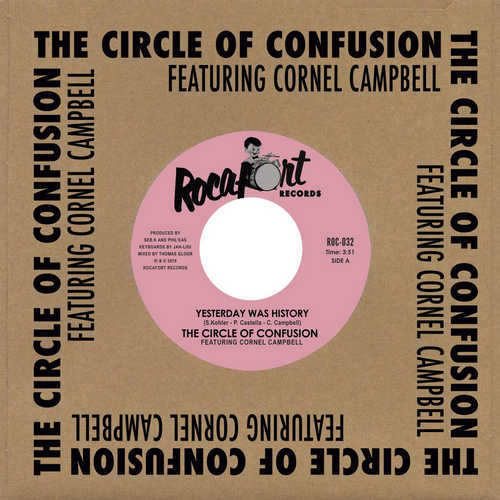 After having released their first roots reggae 7″ single “Hole In The Ceiling” at the beginning of the year, which was the result of the collaboration between Swiss production duo Seb.K (Shakedown productions) and Phil’eas (Black Diamond Music) aka The Circle of Confusion and legendary Jamaican vocalist Cornell Campbell, there’s finally a long awaited and much anticipated follow up single out on the streets.

Although slightly more digital in production, “Yesterday Was History” doesn’t differ enormously from its splendid predecessor. Recorded at Addis Records in Geneva, Switzerland, on the day of Nelson Mandela’s passing, this single is another stellar social commentary and an urgent call for peace and love. With Cornell Campbell’s trademark falsetto voice still sounding sweet (not showing any signs of its 73 years) across a wonderful old-skool vibed riddim that features all the appropriate studio space-age sound effects, harmonics, a deep bass sound and mighty vintage keys played by Jah Lou, this is roots reggae at its very best. In good Jamaican tradition, the flipside contains the dub version, which is as banging and cosmic as the A side. This single and also its predecessor makes one hoping for the release of a full length Showcase album – the vocal cut followed by its dub version – in the future – actually a call for making it happen.

Another great single from this wicked collaboration.