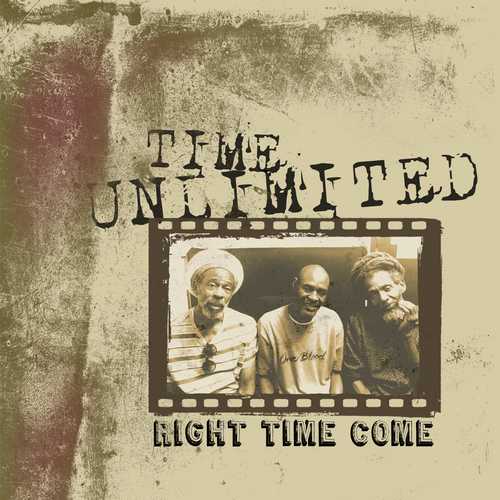 After having rescued legendary singer I Kong from oblivion and having revived Oku Onuora’s recording career with a noteworthy new album, Swiss reggae label Fruits Records is also the driving force behind the return to the studio of Time Unlimited, one of the most obscure and talented Jamaican vocal groups from the early ’80s.

The first line-up of Time Unlimited, formed in the early ’70s, featured founding member Orville Smith alongside Junior Delgado, Glasford Manning aka Porti and Hugh Marshall. Their first recordings were done for Lee “Scratch” Perry in 1973, followed by sessions with Tommy Cowan and Warrick Lyn’s Talent Corporation. Due to experiences in the recording industry, the group disbanded in 1975. Junior Delgado began a prolific career as a solo artist, Orville Smith collaborated with Dennis Brown on the hit song “Won’t Give Up”, while Glasford Manning joined the underrated vocal group The Jewels. Time Unlimited then re-emerged as a trio when Orville Smith recruited Hugh Blackwood aka Istan Black and Donovan Joseph to complete the line-up. By 1980 this new line-up recorded “Living In A Jamdown”, which was produced by Sly Dunbar, but never released at the time. Negligible releases by the group resulted in periods of obscurity, until they started working with Earl “Chinna” Smith and the High Times Band in 1982. In 1983 they released the memorable “2000 Years”, which in 1984 was followed by their debut album, “Devils Angel” on the Live Wire label.

It’s been more than 20 years that Time Unlimited has been off the musical scene. However, during the recording sessions of the Roots Architects project in 2017, Donovan Joseph passed by the studio. The meeting with people of Fruits Records led to bringing Donovan Joseph, Hugo Blackwood and Orville Smith together again as Time Unlimited, resulting in the recording of a deep rub a dub tune with the High Times Players as backing band. Now that tune, “Right Time Come”, has been released on 7″ vinyl with “Dub Time Come” on its flipside. Both tracks have a strong old-skool feel and vibe and are simply great to hear as the three vocalists – Donovan Joseph (lead vocal), Hugo Blackwood & Orville Smith (backing vocals) – still sound good today as they did back then. After having played this single over and over again, it would be something if there came a full length album of this great vocal group in the near future.​

This superb new project from Fruits Records is worth checking!