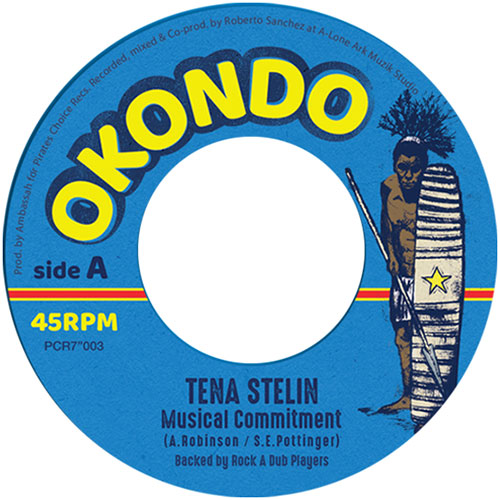 Roots reggae singer Tena Stelin – one of the longest established and best known performers on the UK roots scene – took his name, which means “Greetings”, from the Amharic language of Ethiopia. Tena Stelin’s career started in the late ’80s and he first came to public attention in 1989 with a string of releases for the WAU/Mr. Modo label – two 12″ singles “Thanks & Praises” and the massive popular “Jah Equity”, plus an album entitled “Wicked Invention”, which received rave reviews although the roots revival in the UK at that time was still impending.

In 1995 Tena Stelin had further success with the 7″ single “Can’t Touch Jah” on the Conscious Sounds label. This record heralded the new wave of hi-tech UK dub, creating fresh interest of an audience tired of ragga antics and later introducing dub techniques to the new generation of techno, drum & bass and dance music producers. Tena Stelin followed up these initial releases with full length albums such as “Sacred Songs”, “Take A Look At The World”, “Sun And Moon”, “The Order”, “Lion Symbol”, “Embark On A Journey”, Ancestral Messages” and “Green Places”.

For his first 7″ single released in 2020 titled “Musical Commitment”, Tena Stelin joined forces with Spanish producer Dubby Ambassah, who put it out on his own label named Pirates Choice Recordings. Furthermore involved in this new recording is the omnipresent Roberto Sánchez, who recorded, mixed and co-produced the single – with the riddim played by Rock A Dub Players (members of Message band) – at his A-Lone Ark Muzik Studio. Tena Stelin expertly finds his flow on an awesome sounding old-skool backdrop, which enables the singer’s distinctive voice to come to full expression. On the flipside the listener can enjoy the riddim to the fullest while listening to “Dub Commitment”.