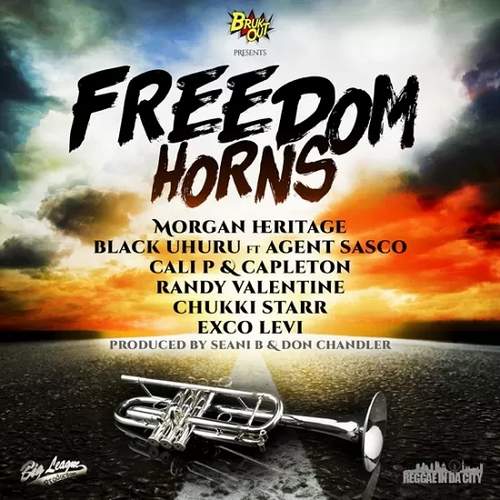 UK-based Brukout Records has unleashed its first project for 2020. The “Freedom Horns” riddim, produced by the Grammy winning duo of Seani B & Don Chandler, originally came to the attention of reggae fans worldwide as the backdrop to the title track of “Strictly Roots”, the 2015 released Grammy award winning album by Morgan Heritage that topped the Reggae Albums charts both in 2015 and 2016.

Besides the Morgan Heritage cut on the riddim, a number of tracks were recorded and released including the collaboration “Dem A Go Burn” by Cali P & Capleton – the official music video has already netted over three million views. The third release was “Stronger” by legendary group Black Uhuru feat. Agent Sasco, which was featured on Black Uhuru’s 2018 Grammy nominated album “As The World Turns”.

And now, finally, there’s the juggling pack of the “Freedom Horns” project which, apart from the aforementioned deadly goods, offers the listener more treats. Included are the big tune “No Hype Attached” and the solid “Can’t Break Me Down” by noted UK reggae artists Randy Valentine and Chucki Starr respectively. Exco Levi, one of the most consistent faces in modern reggae music, delivers the downright masterful “Blood Is On Your Shoulders”. Furthermore there’s the exclusive alternative dub mix of Morgan Heritage’ “Strictly Roots”, Think Tonk’s nicely done Drum & Bass mix of Randy Valentine’s “No Hype Attached” and the straight version of the “Freedom Horns”.