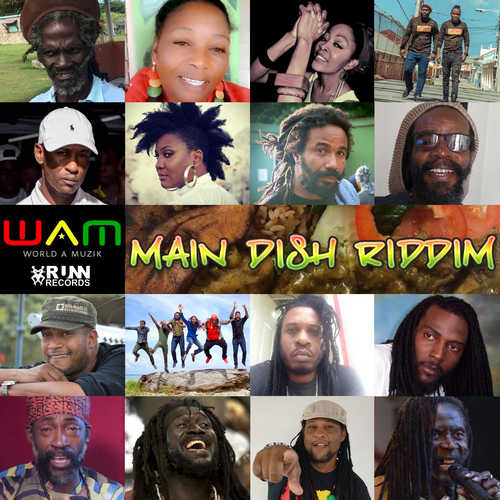 It’s about 17 years ago that the last full length album coming from the collaboration between Jamaican musician/producer Barry O’Hare (owner of the XRated Records & World A Muzik imprints), and the Netherlands based Reggae label Runn Records hit the streets. It was an 18-track one-riddim set titled “Pressure”, which featured tunes done by well known artists as well as talented upcomers from Jamaica and Europe.

The “Main Dish Riddim” is a clearly well-crafted set, brimming with top and diverse vocal talents. The interesting looking line-up includes names of internationally well known artists who have earned their credentials in the past decades as well as promising up-and-comers who are eager to establish their name in the reggae arena. There’re some really strong selections on the “Main Dish Riddim” – not the least of which are potentially stellar efforts from the likes of Everton Blender, Lutan Fyah, Chezidek and the underrated Anthony Que. Furthermore there are also lovely tracks delivered by Prezident Brown, Geoffrey Star, Live Wyya, and Lisa Danger whose “Power Struggle” is golden. Surely not the names that might ring a bell, but nevertheless worth checking are Rayven Amani, Magano and Teeardropz, who have contributed some fine cuts. Also worth mentioning is the inclusion of a tune by Keith Douglas aka Keithy Foundation, who in the ’80s/’90s was the lead vocalist of the disbanded roots trio Foundation from the Port Maria area.

And there is even more new music in the pipeline! So who knows, after their critical acclaimed and successful mid-’90s releases there’s hopefully gonna be a next noteworthy period coming out of this tried and trusted collaboration.

All in all this is a real fine juggling set that should not be overlooked.