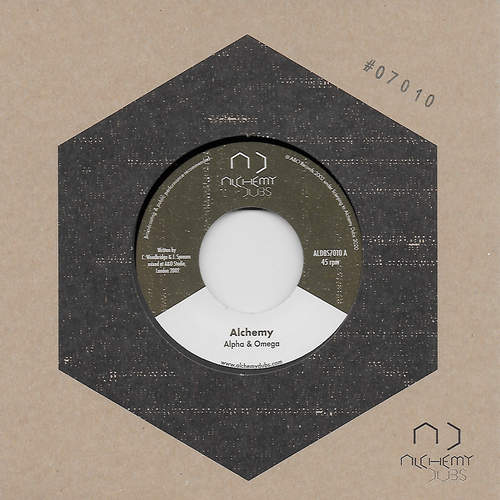 After having released the 7″ single “Freedom Fighters” by Alpha & Omega feat. Paul Fox, the London-based Alchemy Dubs record label has again teamed up with the mystical and mythical UK dub pioneers Alpha & Omega, comprising bassist Christine Woodbridge and keyboard player John Sprosen. For its tenth 7″ vinyl release, the label’s producer and one of the founding members Oscar ‘Ojah’ Pablos has chosen to reissue Alpha & Omega’s suitably named tune “Alchemy” with a new dub version by Ojah on the single’s flipside.

Since 1988, the year they released their debut home-recorded cassette, the duo has created a style of dub that is uniquely British. While initially influenced by original dub recordings by Lee “Scratch” Perry, King Tubby and Augustus Pablo, Woodbridge and Sprosen have evolved their own sound, mixing both analogue and digital elements in their music. “Alchemy” is a vibrant heavyweight instrumental with a haunting vibe that offers the listener a joyous experience especially when played at high volume.

The other side of the single contains a new dub version, expertly done by Ojah. It features heavy use of effects in a UK nineties style, which perfectly complements Alpha & Omega’s original version on Side A. As usual this vinyl single is an Alchemy Dubs limited edition release (600 copies), hand-stamped and hand-numbered, served in a thick custom reversed kraftliner sleeve with inner black sleeves.

Another worthwhile single from the Alchemy Dubs label.