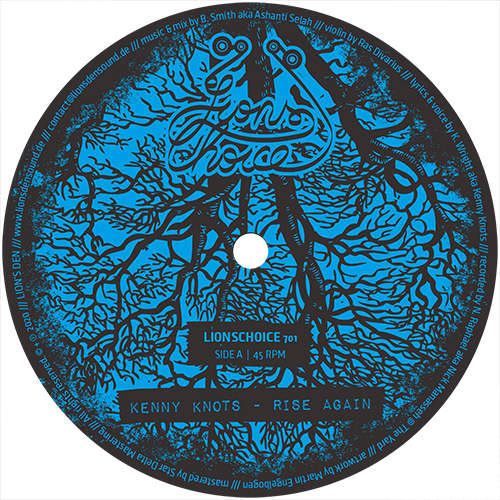 Coming from Berlin, Germany in the Lion’s Choice series, this might be a real novelty; a simultaneously released vocal piece with several different mixes spread on two vinyl platters – one 12″ single and one 7″ single.

Both platters feature the same vocal by London-based Kenny Knots from the UK – a powerful uplifting tune entitled “Rise Again”. The microphone veteran, a well-known figure in the Sound System scene, started his career in reggae singing with North London’s Unity Sound System as a teenager in the 1980s, and had his first big success with his debut single “Watch How The People Dancing”. Since the he has teared up many roots dances with his undimninishable energy, lyrics for days and masterful melodies.

The 12″ cracker offers a collaboration with Massive Dub Corporation from Bourges, France, on the A-Side. Kenny Knots delivers his lyrics over an awesome steppers riddim with a heavy bass sound and great horns. It’s followed by “Dub Again”, which is a great counterpart of the vocal cut. Sonically “Rise Again” and its dub version by Digitron Sound from Zagreb, Croatia, is an offering with a more metallic and darker feel to it.

And then there’s the 7″ single, which features a more rootikal version done by musician/dub producer Ashanti Selah, the eldest son of the world-renowned soundman Aba Shanti-I. His version is wonderfully ‘spiced’ with some violins by Ras Divarius from France, which along with the percussion adds an extra dimension to the riddim. This comes even more to the fore in Ashanti Selah’s dub excursion.

Tailor-made for heavyweight Sound Systems and must-haves for fans of the genre!