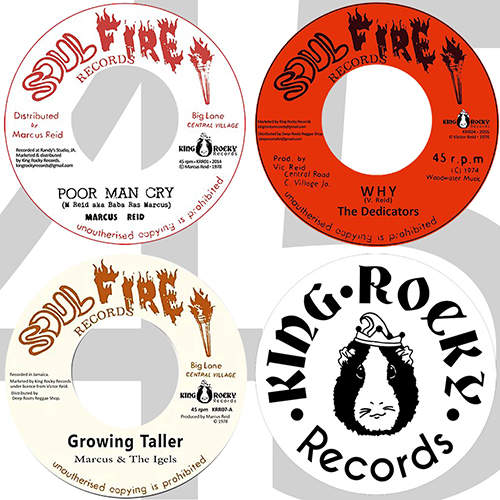 In collaboration with Jamaican reggae singer/producer Victor ‘Marcus’ Reid aka Baba Ras Marcus, King Rocky Records has legitimately reissued three 7″ singles from the 1970s. Using the word ‘legitimately’ in this context refers to the act of serious piracy regarding previous represses of “Poor Man Cry b/w Soul On Fire” on a label (LMS) that changed the name of the artist (Max), the producer (David Madden) and the titles (“Inner City Blues b/w August”). In 2014, King Rocky Records reissued Marcus Reid’s “Poor Man Cry” with the full authorization of the rightful owner, Baba Ras Marcus.

Originally released in 1978, Marcus Reid’s “Poor Man Cry” is a true roots killer, which was recorded at Randy’s Studio and mixed by Errol’ET’ Thompson. Underpinned by an awesome backdrop, in 1974 laid by the Marcus All Stars consisting of Roy ‘Gitsy’ Hamilton on guitar, Aston ‘Familyman’ Barrett on bass, Carlton Barrett on drums, Brother Dennis on keyboard and Augustus Pablo on melodica, “Poor Man Cry” is a dark and powerful testimony on the daily reality of the ghetto. On the flipside, the instrumental “Soul On Fire”, with Augustus Pablo’s melodica play coming to the fore in a great way. BOOM!!!

The initial version of the riddim is featured on the 1974 released single “Why”, which is credited to The Dedicators. It’s actually the duo Hyaana Walker and Marcus Reid who delivers this nice song about a break-up of a love affair – a real tearjerker. The B-side features the decent “Why Version”, having vocal snippets coming in the mix.

With the refined roots tune “Growing Taller”, Marcus Reid and his angels (The Igels) bring an ode to music and its liberating function: “Do not persecute me because I was born free, ear this lackermusic, and tell me if you like it.” The instrumental “Studio Works” on the flipside features a subtle addition of percussions, a nicely done reference to the sound of Africa. The two offerings on this single can be described as typical unconventional raw reggae. They were recorded in 1974, but released in 1978.