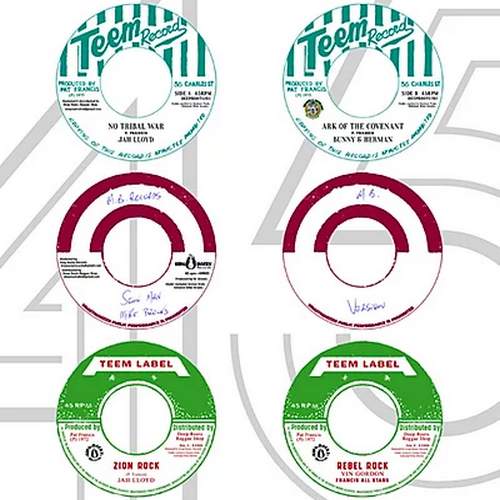 This package contains two singles on Pat Francis’ Teem label and one on M.B. Records, one of Mike Brooks’ labels. Pat Francis began his singing career with the Mediators in the mid-’60s, but switched from singer to deejay after his days as record salesman for Rupie Edwards and Lee ‘Scratch’ Perry. In the early 1970s, Patrick Lloyd Francis, better known as the artist Jah Lloyd (or Jah Lion), started producing and founded his own record label. Inspired by U-Roy, Big Youth and Dillinger, he recorded his first deejay style productions at Randy’s Studio with the support of Rupie Edwards and the help of Lee Perry.

Actually his production debut came with “Sunshine Girl”, a rendition of the Bill Withers song “Ain’t No Sunshine”, done in collaboration with a young imitator of Ken Boothe named Douglas Boothe. And then he also did one of his first solo deejay cuts, “Zion Rock”, on the refined “Ain’t No Sunshine” aka “Drifting Away” riddim. This tune nearly became an Upsetter release, but Vin Gordon aka Don D. Junior who recognized the hit potential of “Zion Rock” urged him to put it out on his own label. And thus the killer deejay cut “Zion Rock” backed by Vin Gordon’s wicked trombone lick titled “Rebel Rock” was released on the Teem label in 1972.

Three years later a next vocal and a bongo cut of the same riddim was released. These two cuts are featured on another 7″ single included in this worthwhile pack edition. Jah Lloyd’s awesome “No Tribal War” is paired with the equally awesome “Ark Of The Covenant” by Bunny & (Bongo) Herman. Killer heavy 1975 roots business!

Originally released in 1982, Mike Brooks’ single “Sensi Man” was pressed in small numbers, which made it a rare release. The single’s label with the hand-written information is also used for this reissue. Mike Brooks’ “Sensi Man”, underpinned by a superb bass driven roots riddim, is an ode to those farmers from the mountains specialized in the sinsemilia with an innuendo: stop the police persecutions against the hills men. On the B side the listener is treated to a deep dub version with explosive dubwise phases and heavy bass.