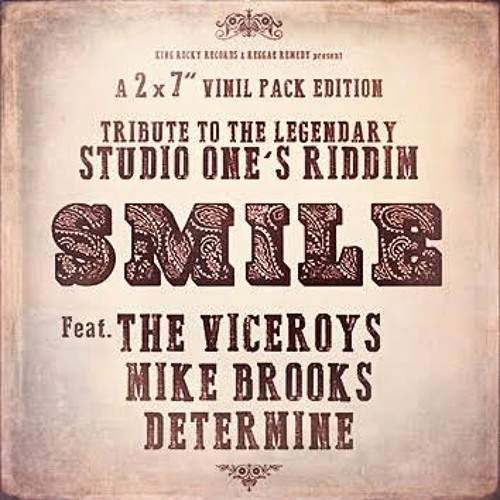 French reggae label King Rocky Records emerged in 2014 and instantly gained recognition with the release of their first 7″ single, the highly acclaimed reissue of Marcus Reid’s 1978 roots killer “Poor Man Cry”. The next year that release was followed by a 2 x vinyl 7″ package in one sleeve featuring three vocal cuts on Reggae Remedy’s new version of the classic Studio One riddim known as “Smile” plus Reggae Remedy Riddim Section’s straight instrumental version, all four previously unreleased.

The Silvertones’ “Smile” is the vocal trio’s major song, recorded in 1977 for Coxsone Dodd at the legendary Studio One across a riddim laid by Brentford Rockers. In good Jamaican tradtion the riddim was done over by various producers including Richard ‘Bello’ Bell, Bunny ‘Striker’ Lee, Henry ‘Junjo’ Lawes, Tappa Zukie, Computer Paul, and Sugar Minott. And later also by French producer Séni Idbelkas of Reggae Remedy.

The first vinyl platter features “How West Was Won” by The Viceroys. They recorded an initial version of this tune for Coxsone but the cut, which was meant to be in a compilation, was lost forever. Wesley Tinglin, the original leader of the group since 1966, Neville Ingram and Gary Paul, re-recorded it across Reggae Remedy Riddim Section’s relicked version of the great “Smile” riddim. Listening to the incredible vocals of The Viceroys on “How West Was Won” is a real joy! On the flipside there’s the thoroughly entertaining instrumental version with the Reggae Remedy Riddim Section making the Hammond organ and saxophone resound perfectly.

Mike Brooks, a Jamaican reggae singer whose career stretches back to the early 1970s, is featured on the A-side of the second 7″ vinyl single. The UK based veteran singer/producer comes up with a great interpretation of the original song, while Determine, the singjay whose most notable recordings were done in the second half of the 1990s, delivers the decent “Smile On Your Face”, a song with incisive lyrics that are necessary, contiguous and positive.