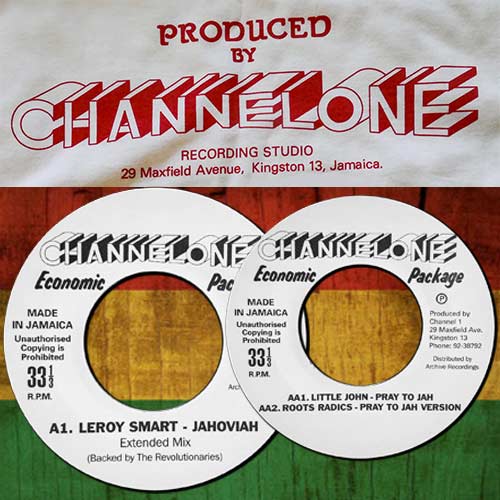 Archive Recordings from the UK comes up with a delightful package for the real reggae fan: Channel One Economic Package Bundle. This very limited edition (maximum of 250!) consists of a t-shirt (sizes are M, L, XL, and XXL), a 7″ record, and carrier bag. The shirts logo colors are red, blue, and or orange as a salute to the Channel One colors used on their labels. If you buy the bundle through the Bandcamp page, they will include another single for a limited period, kind of like a freebie. The track is called Hail The Children c/w Go To Zion by Brother Joe & The Rightful Brothers on the African Music label. This 7″ is Vivian ‘Yabby You’ Jackson’s very first recording.

The standard 7″ single included in the package is a (33 1/3 rpm) double A-side platter. First there’s the Don, Leroy Smart with Jahoviah. Arguably he has built a reputation as being one of the most exciting and polished live performers in reggae music. Besides that his professionalism is second to none among his peers in the Jamaican recording industry. While some of his remarkable success can be attributed to his clean, hard working lifestyle, the main reason for his popularity worldwide are his considerable talents as both performer and producer. In the second half of the 1970s the song appeared on the LP Ballastic Affair aka The Very Best of Leroy Smart. The killer tune is here presented inna extended mix, so there’s plenty to enjoy! Leroy captures full attention right away with his commanding voice, helped by an inspired backing that’s delivered from the heart both musically and spiritually.

The flip-side takes us to 1983 with Little John and Pray To Jah. Born 1970 in Kingston he was so-called as he began performing and recording at the tender age of nine. He is regarded by some as the first dancehall singer, known for his ability to create lyrics over any backing track. He recorded for many producers in the 1980s, notably for Junjo Lawes, Joseph Hoo Kim, George Phang, Jah Thomas, and King Jammy. The impeccable tune is voiced across a laid back, spaced up typical Roots Radics backing track. The instrumental version rounds off the 7″.