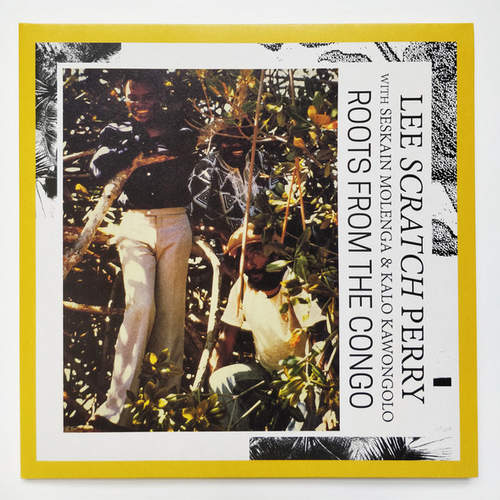 This obscure and at times hard-to-find album is made available once again by Belgium-based Roots Vibration in collaboration with Planet Ilunga, specialized in researching, documenting and releasing Congolese music from the ’50s to ’70s.

Lee ‘Scratch’ Perry had just produced one of the all time classic Rasta recordings, “Heart of the Congos” by the Congos, and had a growing obsession with things African when a Rastafarian, who had once worked for him as a record salesman, brought two African musicians from Zaire – stranded strangers in a strange land – to his Black Ark Studio in the Washington Gardens neighborhood of Kingston. In Perry’s mind, the hand of Jah had delivered them to Black Ark and therefor the musical fruits of this gift must be made manifest. The recordings with the Congolese duo were originally released in France on an LP titled “From The Heart Of The Congo” in 1979 and re-released in Belgium on the Jolie Zaire label in 1991. Then, in 1993, Dutch reggae label RUNNetherlands issued the album on cd for the first time, thirteen years later followed by Trojan Records re-releasing the cd under the title “African Roots”. And now it has been repressed on vinyl although under a new title once again, “Roots From The Congo”.

The songs on this album range from the deep rasta/African chants of “African roots” to the neo-psychodelic horn and guitar solos of “Muto Ya Motema” to the distinctly “Scratch”-produced phase-shifted-and-lions-roaring roots reggae of “Bad Food” and “Mengieb” to the more African sounding grooves and laments of “Nakoya” and “Guimpimbu Gienn”. The singing is mostly in Lingala and some local Zairean dialects, but the musical flavor could have come from nobody else but Lee “Scratch” Perry. This is a missing link not only in Perry’s musical career but between the music of the Mother Continent and Jamaica as well.