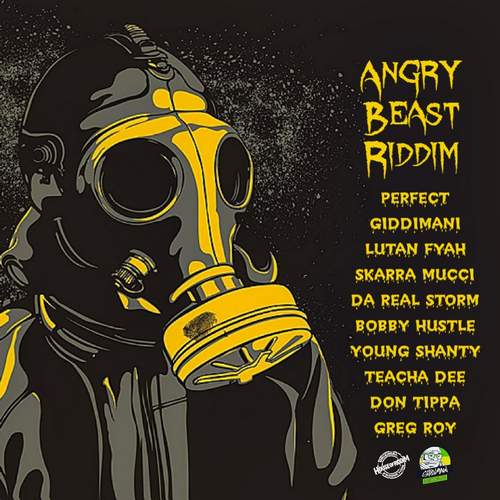 Within two months after the release of their 10-track juggling project called “Dub Club Riddim”, the unstoppable Giddimani Records is back with a next 10-track riddim set, which, just like their previous release, is done in collaboration with Austria’s House Of Riddim. Over the years, that collaboration has proven to be a really good one as reggae fans have been treated to quite a few notable projects. And now they get another noteworthy example of this fruitful working together.

The lively “Angry Beast Riddim” is a fresh roots steppers that has been voiced by established artists as well as upcoming talents. With their songs the artists involved illustrate the different aspects of the world we are living in today. The riddim might sound familiar to the ears of many Perfect Giddimani fans as it underpinned the track “A Baby” off the artist’s 2017 released Billboard #1 album “Live My Life Again”. That already known combination tune with Lutan Fyah is included here as the opener of this collection.

Known for her soulful melody and lyrical eloquence, Jamaica-born female singjay Da Real Storm (formerly Storm), who resides in the U.S., impresses with the compelling title track “Angry Beast”. Another winner is Teacha Dee’s uplifting “Inspired”. The singer’s authentic voice and lyrics keeps the listener’s involved throughout. And then there’s also Skarra Mucci’s “I Told You”, a superb tune about the Babylon system that simply has to go on repeat. Next comes, vocally and lyrically, an impressive offering from Greg Roy. “Buffalo Soldier”, not a cover of the Bob Marley song, is downright intoxicating and without any doubt one of the set’s most outstanding efforts. The last vocal cut comes from Perfect Giddimani, whose powerful “Wrathology” is a solid offering wirth hearing.

A quality riddim with vocal cuts ranging from solid to excellent!