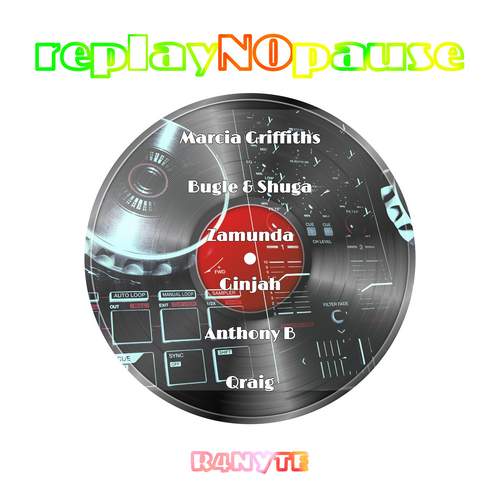 On May 18, 2018 R4nyte Entertainment released the single “Replay” by Bugle and then rising reggae female artist Shuga. The song, which tackles the issue of relationships and the challenges involved, displays a subtle use of paired vocals and even was accompanied by an official music video, filmed throughout sections of Kingston and St Andrew. October 20, 2018 then saw the next worthwhile cut on the riddim being released; “Mr. DJ” by the Queen of Reggae Marcia Griffiths, the most successful Jamaican female singer ever.

Now these well produced and very enjoyable tunes reappear as part of a 6-track riddim set called “Replay No Pause”. As the name of this project suggests, this is meant to be replayed continuously with the riddim’s breezy bassline, soothing percussions and vintage keyboards bringing measured musical warmness to every song.

After the first two already known tracks, Zamunda (born Christopher Gayle) is the first artist to deliver a new cut for the riddim, the delightful lovers piece “Coming Home” on which he treats the listener to his uniquely soulful lyrical stylings. Ginjah comes next with the very powerful sung reality tune “Bail Him”, which is downright devastating. An absolutely wicked tune is “Burning Love”, Anthony B’s call for ‘give and show a little love’ in a world that is in a problem. The set is rounded off in a decent way by Qraig’s very nice sounding “Wanty Wanty”.