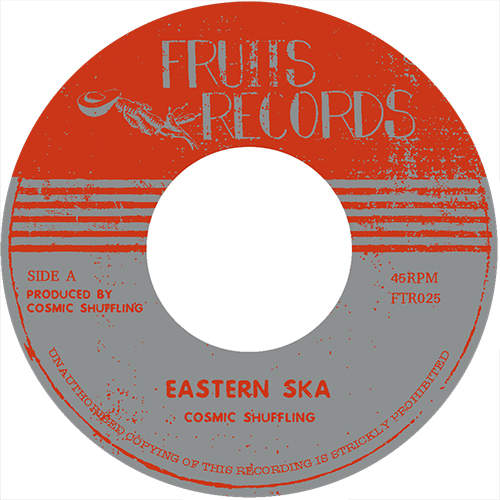 After the release of their 2017 released 12″ single “Cosmic Goes Wild”, the Geneva based Ska & Rocksteady combo Cosmic Shuffling strikes again with two superb Ska instrumentals taken from the “Magic Rocket Ship” studio sessions. They are released on regular black wax 7” vinyl and on a beautiful limited and numbered screen print sleeve edition with black vinyl too (only 90 copies).

While the album release had to be postponed due to the COVID crisis, these two well played irresistible instrumentals give a glimpse of what the “Magic Rocket Ship” album has to offer, although these two pieces will not be included on the upcoming album. On both tracks the horns play an important role, with solos by Basile Rickli on alto saxophone and William Jacquemet on trombone on “Eastern Ska”, which perfectly complement the mighty riddim section, the brass riffs and instrumental compositions. The same goes for Gregor Vidic on tenor saxophone, Anthony Dietrich Bucli on trombone and William Jacquemet again on trombone, who shine on “Western Ska”.

Pure fireball to make you dance and twist during the summer.