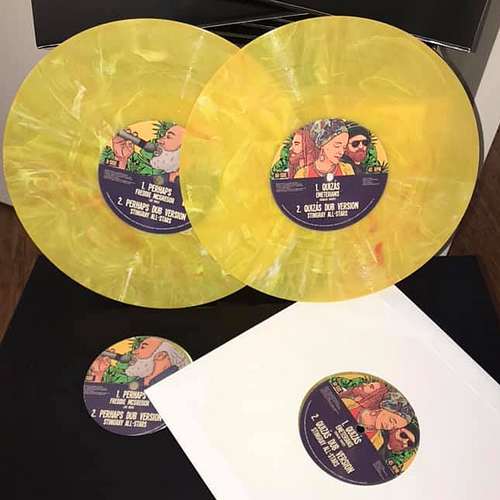 Infini-T Music out of Madrid was created by two members of the Chalice Sound System, Mista, and Sato. They released several productions and their latest feat is an exclusive, limited edition, yellow marbled four-track 10 inch. It features reggae veteran Freddie McGregor and the Spanish group Emeterians. Production credits go to Dillie Mcleod, from Stingray records.

Boasting a stellar career that spans over 40 years, Freddie McGregor began developing his craft in the mid-sixties. Though his versatility allowed for all types of music he always kept a preference for lyrics of social consciousness and upliftment. With his soulful vocal delivery, he’s always mentioned in any reggae fan’s all-time favorites list.
He brings us a super smooth rendition of Perhaps, a tune that Doris Day (!) recorded in 1964 for her Latin For Lovers album. This lovers’ rock gem is followed by the dub version from the Stingray All-Stars: Mafia & Fluxy, Javier Martin Boix on guitar, and Marcos Crespo on trombone.

The B-side holds a Spanish version of the Doris Day song, brought by the trio Emeterians, a highly talented trio, consisting of Brother Wildman, Sister Maryjane, and Maga Lion. Coming from Madrid, Spain, the 2004 formed Emeterians have recorded several outstanding singles and albums. The heavenly voice of Sister Maryjane, supported by the harmonies of Brother Wildman and Maga Lion, flows effortlessly across the riddim by the Stingray All-Stars. The song is also included on their album Roots O’Clock. A dub version rounds off this enjoyable 10 inch!

Get the 10 inch at Melting Pot Records.