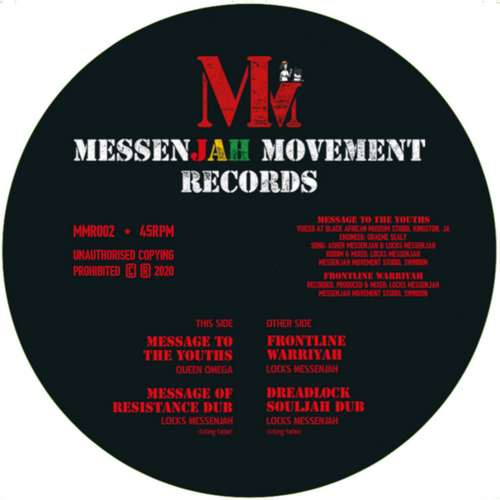 We recently posted a news item about the second release from MessenJAH Movement Records, and last week a copy of the 12inch arrived at our desks. The four-track vinyl platter, (also available as a digital download) features one of reggae’s most powerful empresses, Queen Omega. Born in Trinidad, she began her career singing in calypso and soca bands. Being influenced by Rastafari beliefs, she focused on roots reggae. After having moved to the UK, she embarked on a successful career, releasing several top-notch albums.

The B side is a 100% Locks MessenJah production. It’s the follow up to his first release Jahngle Warriyah. The mid-tempo militant steppers riddim is the perfect backdrop for the distorted vocal sounds and adds a kind of terrifying atmosphere to the song. Stern, uncompromising heavyweight stuff from the ‘Rastafari Souljah’! The balanced dub rounds off the 12inch.