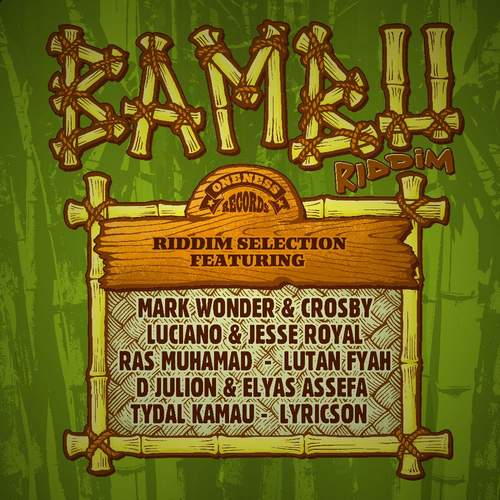 The Munich Germany based Oneness Records, founded in 2006 by Benjamin Zecher and Moritz “Da Baron” Von Korff, has definitely become a favourite amongst reggae fans worldwide not least due to being one of the most reliable imprints when it comes to producing some of the absolute finest and best quality possible Reggae music. For their various projects – artist albums as well as compilation – they’ve engaged some of the biggest vocal talents as well as some others who in the end have become stars as well.

Their first juggling project in 2020, and the follow up of the November 2019 released “Outernational Riddim”, is the Dub-influenced “Bambu Riddim”. The latter derives from a collaboration with blazing Indonesian Reggae artist Ras Muhamad, who co-produced the riddim and delivers the title track ‘Bambu Keras’, meaning ‘tough like bamboo’ in his Bahasa mother tongue. Speaking to issues of injustice, mental and spiritual liberation, the title is also a play on words, resembling two words that are considered ‘offensive’ in the Jamaican dialect. Check the line-up of artists and it’s obvious that the Oneness’ production crew has managed to surround Ras Muhamad with an impressive cache of vocalists.

The “Bambu Riddim Selection” features previously released singles taken from albums by Luciano (“The Answer”), Ras Muhamad (“Satryo”), Mark Wonder (“Remz Of The Dragon Slayer”), and Lutan Fyah (“Touch The Road EP”), plus new vocal cuts by Tydal Kamau (Jamaica), Lyricson (Guinea) and Elias Assefa (Ethiopia). There really isn’t a single tune on the “Bambu Riddim” to dislike. Lutan Fyah’s “Gone Too Far” is one of the best efforts on the riddim, while the strong “Voyages Across The Sea”, which deals with the Refugee issue, ia a superb combination tune by the immaculately gifted singer Mark Wonder and Crosby, the South African dancehall MC and singer from the township of Gugulethu. Also worth hearing are Tydal Kamau’s “Don” and “The Music”, the collaboration between Luciano & Jesse Royal.

The “Bambu Riddim Selection” is well recommended and appropriate to fans of all types.