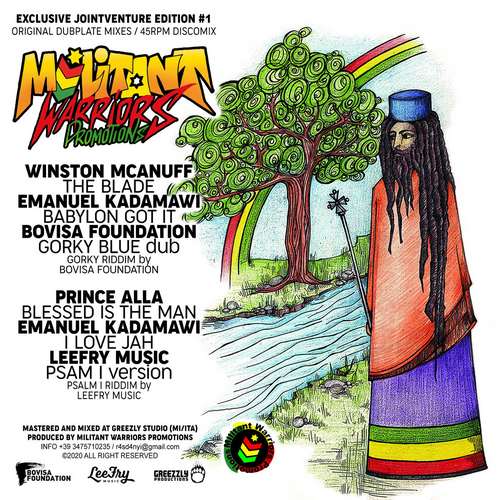 Militant Warriors Promotions is an independent music label out of Milan, Italy. Rooted in different musical passions that range from Roots Reggae to Hip-Hop and digital club & Bass Music, they are open to any musical contamination and form of expression to spread a message of universal unity. Militant but at the same time apolitical, they are focused on the social message, becoming a vehicle of information. Since 2013 they are spreading their productions with considerable success. Their latest feat is a fruitful collaboration with two Jamaican reggae legends, toaster Emanuel Kadamawi and the band Bovisa Foundation. Six tracks across two solid riddims, the Gorky riddim by Bovisa Foundation and the Psalm I riddim by Leefry Music.

Winston Mcanuff aka The Electric Dread, is one of the obscure names of reggae. From 1975 on, he recorded several songs for Derrick Harriot, which in 1977 gave birth to his first album Pick Hits To Click. In the 1980s he released some albums for the Inner Circle label Top Ranking and recorded some cuts at Channel One with his band The Black Kush. This underrated singer was given a proper anthology by the French label Maka Sound, and though not very active, he occasionally puts out fine releases.

Prince Alla became known in the mid-1970s when he teamed up with producer Bertram Brown. The result was a string of excellent recordings for Bertram’s Freedom Sounds imprint, that have since proved landmarks in the history of roots music. His debut set Heaven Is My Roof for Tappa Zukie came out in 1978. Since then released some albums in the 1980s and he still sporadically puts out new material.

Side B sees Prince Alla delivering a stepper-esque piece, Blessed Is The Man, that pulls out all the stops. The veteran truly has something to say and he definitely delivers, helped by a brooding backdrop by Leefry Music! Vibes up on the collab with Emanuel Kadamawi, a tune that showcases Kadawami’s toasting talents. The dub, a bass-driven instrumental, closes the highly enjoyable 12 inch.

Big Ups to Militant Warriors Promotions for this release!.