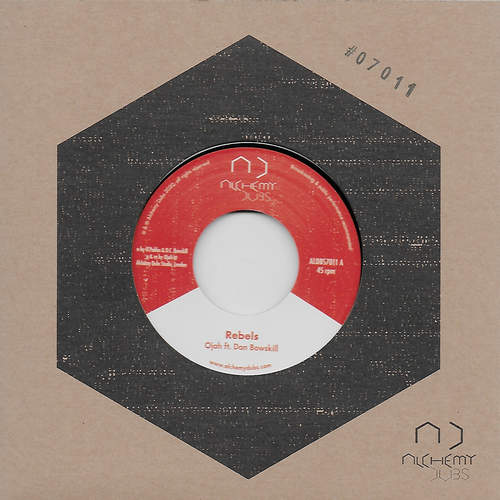 After a forced break due to the Corona crisis, Alchemy Dubs, the label that has a strong belief in dub as an artform and a strong love for all dub aesthetics and tool, is back with their next vinyl release, the eleventh on 7” vinyl. This time it’s a collaboration project with well respected UK artist Dan Bowskill, who was formerly known as Danny Vibes.

The London-based singer/songwriter, voice-over artist, actor, guest vocalist for Dub Pistols, and part of the international band Crossfire, has been working with people such as Dub FX and reggae dub producer/sound man Russ Disciples. Recently he has teamed up with Ojah of Alchemy Dubs to deliver a modern roots vocal performance over a brand new Steppers riddim. The lyrics for the song “Rebels” first appeared on his collaboration with Russ Disciples called “Rebels On The Streets”, which was released on 12″ vinyl in 2013. The new version, which outmatches the original, has been given a completely new perspective and delivery over the killer backdrop with its awesome bassline.

Ans as usual, the B side of an Alchemy Dubs single is often also worth checking out. The instrumental dub version entitled “Rebels Dub” is no exception. Mixed live in analog style & fashion by Ojah at his studio in London, “Rebels Dub” is simply great to listen to. Just like the previous releases, this one comes as a limited edition of 350 copies, hand-stamped and hand-numbered, served in a thick custom reversed kraftliner sleeve.

Not to be missed!