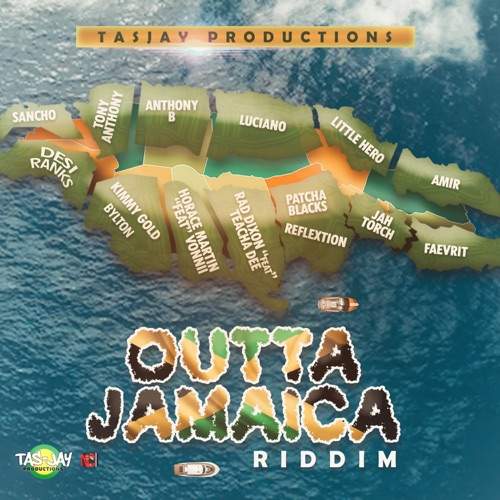 Last month Tasjay James Smith’s Toronto, Canada-based record company Tasjay Productions put out the reggae juggling “Outta Jamaica Riddim”, a project that started about two years ago. The riddim is a revamped version of the rub-a-dub backdrop that underpins Dennis Brown’s 1981 tune “Have You Ever Been In Love”, which was inspired by American soul singer Barbara Acklin’s big hit “Lady Lady Lady”. The killer riddim was built and produced by the legendary Sly & Robbie for their Taxi label.

Of course, internationally best known names on the tracklist of the 16-song compilation are Anthony B and Luciano, although Little Hero, Teacha Dee, Tony Anthony, Kimmy Gold and Tasjay Productions’ long-time collaborators Rad Dixon, Horace Martin, and Patcha Blacks might also be familiar to reggae connoisseurs and followers. Of these names it are in particular Luciano with “New Sheriff”, Rad Dixon feat. Teacha Dee with the uplifting “Keep The Children Safe”, and Horace Martin feat. Vonnii with “Awake Jah Jah Children” that leave the best impression. Of the remaining tracks the finest pieces are Jah Torch’s “Give Jah The Honor”, Faevrit’s “Cease”, and Bylton’s “Fake Friends” that have the greatest appeal. The straight forward rinse of the riddim included at the end is candy for your ears.

There’s certainly something to find on this selection you’ll enjoy.