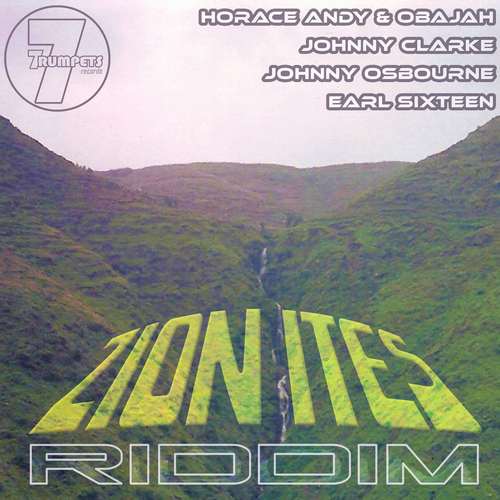 Seven Trumpets Records, based in Paris, France, is dedicated to promoting roots reggae and rub a dub music worldwide. Their latest release is the Zion Ites Riddim, a 100% roots reggae backdrop, originated by Martin Menahem, engineered and mixed by François ‘Cisko’ Laclotte at Guardian House Studio.
The remarkable rootsy heavyweight ’70s style dubby riddim is the perfect backdrop for the efforts of original Jamaican artists and Paris based artist Obajah. The 12″ holds tunes by Johnny Osbourne, Earl Sixteen, and Johnny Clarke. The 7″ sees the successful collab between Horace Andy and Obajah.

What can we say about the household Jamaican artists featured here? Any reggae fan will surely know and love these veteran artists. With careers spanning about 50 years -and still touring and recording-, Johnny Osbourne, Johnny Clarke, and Horace Andy are pivotal figures in the Jamaican music history. Earl Sixteen came to prominence in the mid-1970s and is a valued artist who is still active.

Nowadays all reggae fans in the world know that real good reggae music doesn’t necessarily have to come out of Jamaica. This release out of France proves it once more. The authentic riddim is pure excitement from start to finish. Nothing flashy or dibby dibby; just pure roots reggae, real King’s Musik.
Johnny Osbourne warns us not to “kill the goose that lays the golden egg” and that we “bite the hand that feeds you”. Severe warning for the bad-minded! The dub that follows, featuring Bongo Kermit, is overwhelming; Johnny’s vocals fading in and out, splashing around in the echo chamber.
Earl Sixteen’s Survive Inna Babylon is a strong reality song with incisive lyrical content, worth hearing more than once. Johnny Clarke rounds off the 12inch in his typical roots style.
Horace Andy treats the listener to an intoxicating song, helped by Obajah. Obajah’s laid back toasting parts are a worthy addition to Horace Andy’s solid effort. The B-side is a straight instrumental cut of the riddim.