B. B. Seaton – Voice Of The People

B.B. Seaton – Voice Of The People 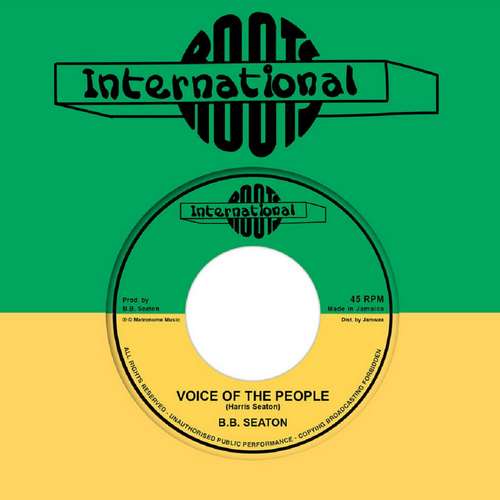 Reggae Veteran Harris Lloyd Seaton or B.B Seaton as he’s known among reggae followers, started singing and writing songs from his high school days at Cornwall College in Jamaica. With the Gaylads he scored with Lady With The Red Dress for Studio One in 1967. After ten years of working with companies in Jamaica like Studio One, Tip Top Records, Beverley’s Records, and Treasure Isle as either A & R, producer, writer, musician, and backing vocalist, B.B. Seaton decided to go solo.
Since then he has released a notable amount of hit tunes and some numerous full-length albums. Needless to say that London based BB Seaton is one of the greatest singers, songwriters, and producers to come out of Jamaica.

In 2005 he released the double album Reggae Land on his own Soul Beat label, featuring 14 brand new vocal tracks on disc one and their dub versions on disc two. June 2020 saw the release of one of the tracks from the album –Voice Of The People– as a 7inch by the French label Jamwax Records. They reissue lost treasures from the Jamaican & Caribbean music history with their slogan “The Future Sounds Of Yesterdays Dreams”.

Across an uptempo steppers alike riddim he treats us to powerful lyrics presented with the soulful delivery which has been the trademark of one of the true legends of rocksteady and reggae. With Voice Of The People BB Seaton focuses on delivering a strong reality tune with meaningful lyrical content. The flip side brings us a traditional dub workout with nuff echo and reverb and snippets of Seaton’s vocals fading in and out.