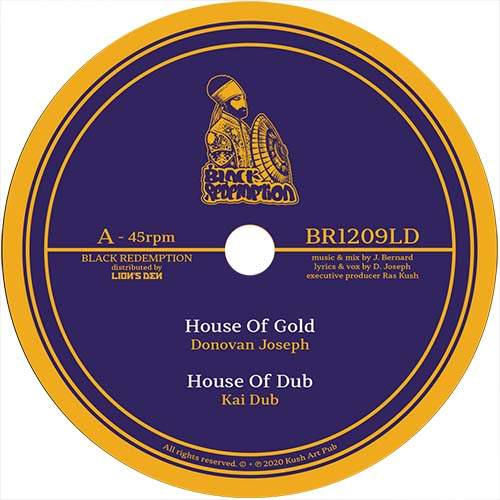 The two latest Black Redemption released 12″ singles are all about the Kai Dub created “Fresh Like The Morning” riddim. While the first vinyl platter featured vocal excursions of Jesse Royal and Wellette Seyon on the powerful UK Steppers riddim, this one is a family affair as the vocal cuts included here come from veteran Donovan Joseph and his son Autarchii.

Donovan Joseph was a member of the second line-up of the group Time Unlimited, one of the most obscure and talented Jamaican vocal groups from the early ’80s. Last year the vocal group, consisting of Donovan Joseph, Hugo Blackwood and Orville Smith, reunited to record the deep rub a dub tune “Right Time Come” with the High Times Players as backing band. And now there’s Donovan Joseph’s solo piece “House Of Gold”, a real roots killer destined to become a favourite in the roots sound system scene. The overall vibe coming from the veteran singer’s vocal style fits the riddim perfectly well. The vocal is followed by Kai Dub’s wicked and wild “House Of Dub” that fires on all cylinders.

The B-side reveals Autarchii’s take on the riddim titled “As The Water Flows”. This effort once again affirms that he’s a gifted singer/songwriter, who surely shouldn’t be overlooked as his releases so far make clear that he deserves to become a household name amongst roots reggae fans worldwide.