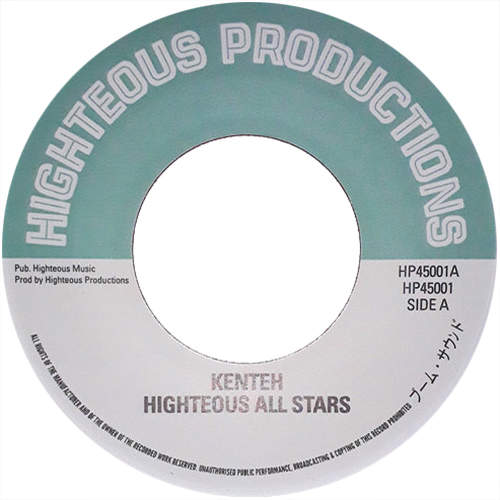 It’s always good to see a new label emerging on the reggae scene. In this case we’re talking about Highteous Productions, a UK-based music label launched during the last week of December 2019, which specialises in mainly roots and dub music.

With regards to their first single, which is called “Kenteh” (pronounced as Ken – Tay) and is an actual redo of the famous “Kunta Kinte” dubplate instrumental. Pretty sure a lot of reggae fans will be instantly familiar with this powerful but also mysterious instrumental, which is especially a favourite within sound system culture.

The entrancing, spiritually-infused roots instrumental played by The Revolutionaries at Channel One was first released in 1976 as backdrop of Creole’s roots killer “Beware Of Your Enemies”. That same year a dubplate instrumental version of that great Revolutionaries’ riddim – now called “Kunta Kinte” – also saw release. Since then more versions of the riddim have seen the light of day including reinterpretations by Mad Professor, Obeah, Congo Natty, Jah Shaka and Adrian Sherwood. The latest version, and a nice one too, is featured on red coloured 7″ vinyl and comes from the Highteous All Stars. Side A features a modern Steppers style version of the riddim with nice melodica play on top of it, while – apart from a mall part after the intro – the flipside doesn’t contain the melodica but offers the straight version.

A very promising debut single from the new reggae label.​