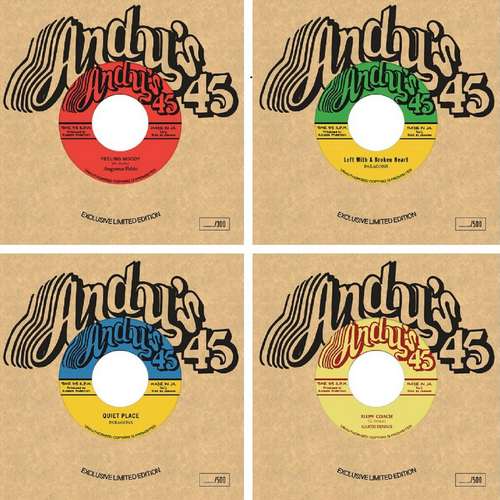 Roydale Franklin Anderson (aka Andy or Benno) was born in Kingston in 1943. Some twenty years later he migrated to the Bronx, New York. With his brother he started a taxi-service, but also sold records op the side. This led to the opening of Andy’s Record Store. He sold and distributed the latest and hottest music coming out of the studios in Jamaica. Being a close friend of King Tubby and Keith Hudson he became involved in producing artists such as Gregory Isaacs, I Roy, John Holt, Slim Smith, Augustus Pablo, and Garth Dennis. Around 1976 he left the music business and started working for the Eastman Kodak Company. On Christmas 2018 he passed away.

At the end of 2019 the French label Jamwax Records reissued four 7inch singles produced by Andy in 1974. The indenpent label reissues lost treasures from the Jamaican & Caribbean music history with their slogan “The Future Sounds Of Yesterdays Dreams”.

The origins of Left With A Broken Heart go way back to 1964 when the song appppeared on the debut LP of the Four Tops. Wonderful smooth tune, written by Marv Johnsson. Anyway, the song was a soul favorite in Jamaica and got covered by The Paragons, which surfaced in 1968 on the Duke label. This package contains two 45s featuring the riddim, both released in 1974 on the Andy’s label. There’s the superb vocal cut from the Paragons with John Holt on lead vocals. On the flipside we meet one of the best deejays from the 1970s, the mighty I Roy, who takes full control and spews his pain and hurt feelings about his unfaithfull woman. Double A-side slice! Melodica virtuoso Augustus Pablo flows gently but with total confidence across the riddim track. The flipside is a straight forward version. The bassline of the wonderful backdrop inspired Dennis Brown’s mega-hity tune Revolution

We meet the Paragons once more on the third single, Quiet Place. And once again it’s an awfull rendition of a soul hit from the 1960s. It was recorded in 1964 by Garnet Mimms & The Enchanters. Bass driven backdrop and power vocals by John Holt and his compagnons! I Roy hits hard with his version Noisy Place. Many artists used the lyrics of the tune across a different riddim, such as Roland Burrell’s 1983 hit Johnny Dollar, but he used Alton’s Mad Mad riddim.

The fourth single is a true killer classic from the former Black Uhuru and Wailing Souls member Garth Dennis. Pure rootsy stuff underpinned by the drum and bass power of the Barrett brothers. On the flipside we find the modest dub version, interspersed with vocal snippets.