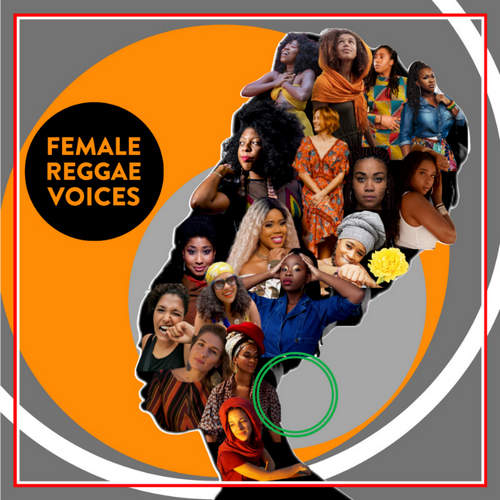 From Switzerland comes the fresh reggae riddim selection titled “Female Reggae Voices”. As the title clearly indicates it’s a juggling project featuring only female singers. It actually are 17 artists from all around the globe sing delivering their cut on the same backdrop. Although not completely unique, it’s one of the very few projects in the history of reggae music that has a line-up that solely features the names of songstresses.

During the last couple of years there was a huge discussion going on about the fact that women are less promoted in music industry, booked less on festivals, given less exposure and being less rewarded for their art. So the goal of “Female Reggae Voices” is obvious: trying to give the participating artists a boost in reach, audience, visibility and recognition, because the music industry is still a very male-dominated world, and so is the reggae scene unfortunately too in spite of artists such as Koffee, Sevana, Jah9 and Lila Iké. Anyway, with this album producer Res Staudenman tries to make a contribution in the struggle for change.

Throughout the entire album, the listener can experience the passion and commitment of all artists involved. The artists, coming from Jamaica, Germany, the Netherlands, Switzerland, the US, Italy, France, the UK, Brazil and Spain, sing about women’s rights, feminism, the fight and struggle against rascism, empowering themselves, they sing about freedom, love and unity. Each song has its own merit and tells its own deep and important story, but those that especially stand out are Joby Jay’s uplifting opener “Queen”, Samora’s compelling “Free Up”, TriXstar’s empowering “Live My Life”, and Mary Jane’s call for unity titled “One People”.

In all, this all-female riddim selection is worthwhile hearing and supporting.