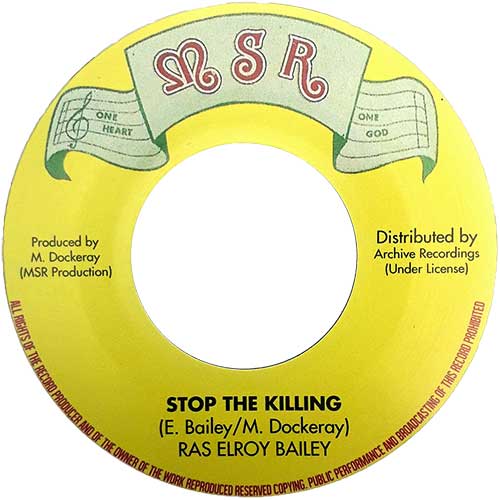 Ras Elroy Bailey was born in Hackney, London UK to parents who came to London in the Wind Rush era. His father owned a sound called ‘Eric the great International’, and young Elroy was influenced by the music he heard there. He joined his father’s band, and later he was invited to play bass in a band called ‘Young Ones from Zion’. They changed the name to Black Slate… and the rest is history. Ras Elroy died in the spring of 2018.

The reissue label Archive Recordings from the UK has released an ultra-rare roots piece from Ras Elroy. It’s the tune Stop The Killing, produced by Melos Dockeray in 1977. The original title was Stop Your Killing by El Roy on the MSR label. The label was run by the reggae group Mighty Soul Rebels out of London.

He must have been inspired when, at a crossroads in his life, he had to choose what to do with his life. He saw that many people in his area began to follow the path of crime, whereas he chose a career as a musician. The result is an emotional roots song with a powerful message, across an appropriate backdrop, with the magnificent horns defining the atmosphere. The dub version is to the point, a wicked combination of bass, drums, and horns, with sparse sound effects.