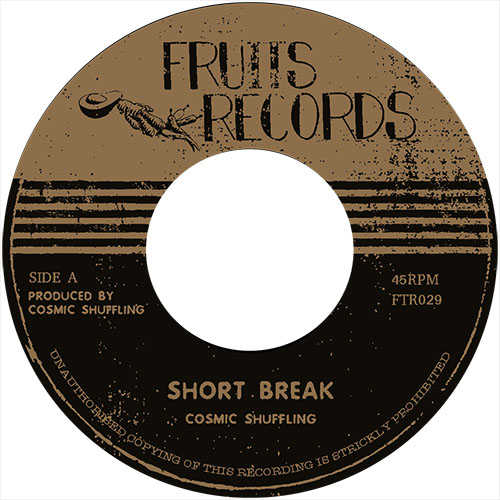 After the release of their double A-sided ska 7” single “Eastern Ska” b/w “Western Ska” in the month of June, Geneva based combo Cosmic Shufflin is back with another double A-sided single. The two instrumentals were recorded at Bridge Studio, Geneva, by Mathias Liengme and mixed at A-Lone Ark Muzik Studio, Santander, by Roberto Sánchez.

The instrumental piece featured on the A-side entitled “Short Break”, is a well done and expertly played composition that takes the listener right back to the period of 1966-1968, when Rocksteady was the dominant style of music in Jamaica. The combo’s great musicianship is quite evident present and the sax solo parts make it a real joy to listen to the beautiful “Short Break”. The same goes for “Revenge” on the flip side. Here the listener is treated to a Shuffle Ska instrumental led by a magnificent six-piece horns section with fine trombone solos done by Anthony Dietrich Buclin and Ludovic Lagana. Named after Anne Bonny’s boat, this instumental is an exclusive 7” release, and thus it will not be featured on the Cosmic Shuffling’s upcoming album.

“Short Break” & “Revenge” are available on regular black wax 7” vinyl and on a limited and numbered screen print sleeve edition (only 90 copies!) with black vinyl too.