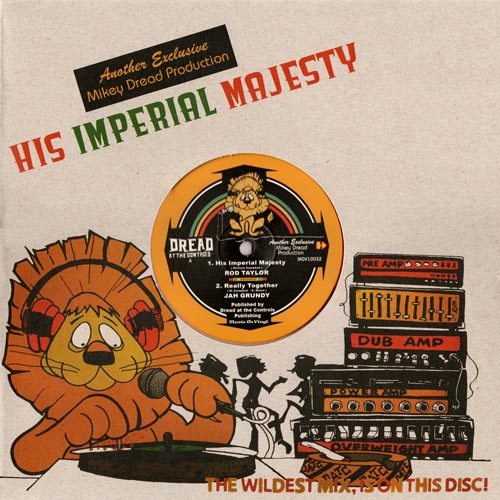 Michael Campbell aka Mikey Dread was an exceptional and consistently fascinating figure in reggae music. He delivered his earliest contribution to the reggae business towards the end of the 1970s when he started to host his popular radio show Dread At The Controls on JBC. It was the first reggae radio show on the Island. Mikey became an hero and his success enabled him to record some tunes for Lee Perry and Sonia Pottinger. After he was forced to resign from his program in 1979 he turned his full attention to recording and launched his own D.A.T.C. label.
With fresh-sounding production work, Mikey Dread became part of a group of young and talented producers who made their mark in the late 1970s. He produced himself as a deejay, as well as hard roots singers like Rod Taylor, Edi Fitzroy, Earl 16, and Junior Murvin, to name a few. The exceptional dub sides and version sides made people buying the records for their dubs only! He also toured with The Clash and even produced some of their songs. In the 1990s he toured the world, provided vocals with the Singers And Players on Adrian Sherwood’s On-U Sound record label, produced dub tracks for UB40, and was involved in other projects. Late in 2007, he was being treated for a brain tumor, and on 15 March 2008 he passed away.

Music On Vinyl, the Dutch vinyl only (high-quality 180g LP’s and 7# pressings) reissue label has already earned respect in the reggae scene with superb vinyl reissues of classic albums. Check out Bob Andy’s 1978 album Lots Of Love And I, The Uniques rocksteady album Absolutely The Uniques!, Gregory Isaacs Out Deh!, Bunny’s 1976 set Sings The Wailers and Ini Kamoze’s stunning debut set Ini Kamoze. Further interesting sets are Lee Perry’s Scratch The Upsetter Again and The Skatalite! by The Skatalites.
For Record Store Day 2020 they have issued a magnificent 10″ EP, containing 4 tracks across the riddim of Rod Taylor’s His Imperial majesty. It’s a limited edition of individually numbered copies on red, green, and gold vinyl, delivered at random.

Rod Taylor started his career in the latter half of the 1970s with releases for Dudley ‘Manzie’ Swaby and Bertram Brown’s Freedom Sounds collective. In 1978 the single His Imperial Majesty was released on Mikey Dread’s label Dread At The Controls. The song is one of the most inspiring roots songs of the era, addressing the Rastafarian themes of repatriation, Babylon, freedom, slavery, and liberation. The riddim is carried by the majestic horns refrain in combination with the compelling bass line.

Jah Grundy steps up for his deejay version called Really Together in a typical 1970s deejay style. He only recorded a limited amount of songs, otherwise little is known about him. The flipside features the deejay version by Mikey Dread, Armageddon Style. Mikey goes wild here as a successful imitator of Eek A Mouse’s style. The record closes perfectly with the dub version, with echo and reverb efficiency conceived by none other than the dub master/inventor King Tubby.