Toots and The Maytals – Ska Father

Toots and The Maytals – Ska Father 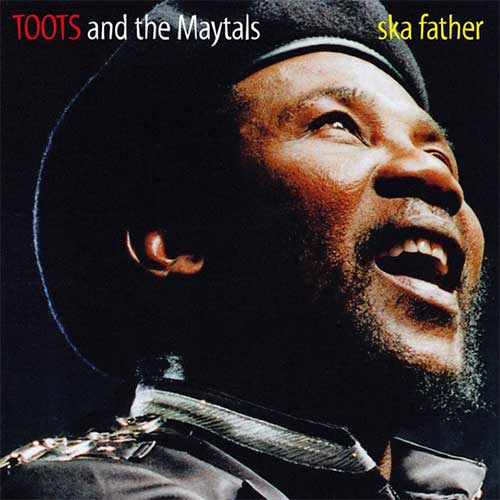 In 1962 Toots Hibbert formed The Maytals with Raleigh Gordon and Jerry Matthias. For Coxsone Dodd they scored some massive hits. After a stint with Prince Buster, The Maytals moved on to Byron Lee’s stable. In 1965 both sides of the single Daddy/It’s You topped the Jamaican charts, and in 1966 they won the Jamaican Festival Song Competition with Bam Bam. Their success came to a halt when Toots had to serve time in prison for possession of marijuana. After his release, they teamed up with producer Leslie Kong and almost immediately released the immortal 54-46 That’s My Number based on Toots’ prison experiences.

They recorded a bunch of classics such as Pressure Drop, Monkey Man, and Sweet And Dandy. With Leslie Kong’s untimely death in 1971, The Maytals lost their mentor. For many reggae fans, the songs recorded while with Beverley’s was their best work. Through their output for Leslie Kong and Byron Lee, they had attracted the attention of Chris Blackwell and became Toots and the Maytals. Blackwell’s Island Records released what became their biggest-selling album Reggae Got Soul, which took them into the UK album charts.

In 1981 the group split up. Toots Hibbert continued to record as a solo artist throughout the 1980s. A new lineup was formed in the 1990s, and they took up recording and touring, releasing several albums. In 2011 the documentary Reggae Got Soul: The Story of Toots and the Maytals, was released. Toots kept touring, and in 2018 they launched a 50th Anniversary tour with concert appearances in North America and the UK. August 2020 saw the release of the album Got To Be Tough. On September 11 he died at the University Hospital of the West Indies in Mona, Jamaica, due to complications of COVID-19.

At the end of the 1990s, Toots came up with a new album. The title Ska Father referred to his successful past as one of the great ska and reggae pioneers. September 2019 sees the release of a repress in red vinyl, limited edition!
What is striking about this release is the incredibly fast tempo of the songs. The classics Broadway Jungle and Pressure Drop, are given a speed injection, which in terms of style ties in with the reggae punk and ska revival period of the late 1970s. The dub version of Broadway Jungle is not really a dub, it is a swinging instrumental version, led by the hornsmen Dean Fraser, Johnny Moore, David Madden, and Nambo.
A striking choice is the cover of You Really Got Me, original by The Kinks. Toots knows how to convert the song convincingly into a swinging ska song. The reflective ballad God Bless You is somewhat out of place, and with the gospel-like Bound To Win, Toots, as it were, brings Otis Redding back to life.

Check Toots and the Maytals Music