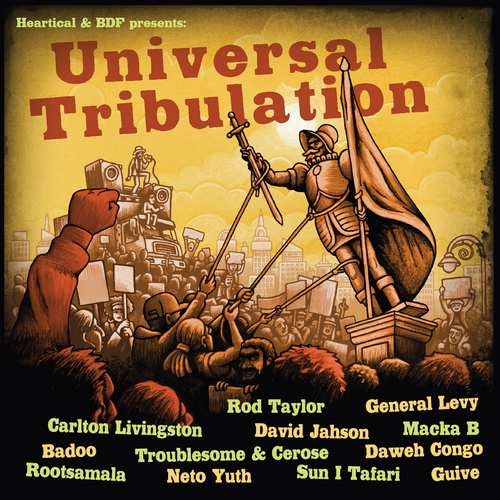 Paris-based Heartical record label returns with a brand new project for which Heartical producer Sergio Marigomez has again teamed up with Inyaki Yarritu, the mastermind behind Basque Dub Foundation (BDF). Since their collaboration started in the early years of the new millennium it has led to many worthwhile ‘one riddim’ releases. Although these releases included a few original backdrops, they were mostly Jamaican vintage riddims that were relicked. And thus the reggae fan was treated to revamped versions of a.o. Roland Alphonso’s Jah Shakey, Lloyd Parks’ Slaving, Sound Dimension’s Real Rock, Ernest Wilson’s I Know Myself. And now they have given new life to the riddim of Gregory Isaacs’ Universal Tribulation that appeared on his 1979 album Soon Forward. Heartical’s juggling project is a nice tribute to the Cool Ruler, who passed away ten years ago.

This collection not only includes cuts from such established reggae artists as UK chatter Macka B, General Levy, Daweh Congo, Rod Taylor, and Carlton Livingston, but also features contributions from fresh upcoming or simply lesser-known names like Toronto-based singjay Neto Yuth, the sister and brother duo Rootsamala from Malaga, Spain, and British singer Sun I Tafari. Although it’s especially great to hear Macka B’s Humble We Humble, General Levy’s Twists & Turns, Rod Taylor’s I’ve Been There Before, and Rootsamala’s Believe In Yourself, also the other tracks have their merit. The selection is rounded off with the wicked Universal Dub Tribulation by BDF Band & James Zugasti.

​In all, another worthy riddim project from the Heartical label.