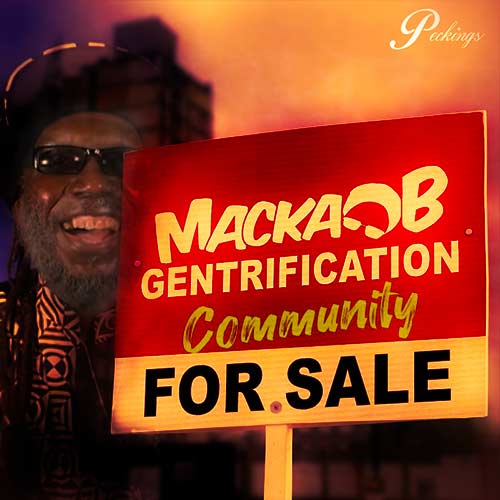 Known affectionately as ‘The Big Rastaman’, Macka B has been at the forefront of UK reggae music for 30 years. From his humble beginnings on Sound Systems in the UK, he has become an internationally respected reggae artist doing shows and playing festivals all over the world. He is renowned for his social commentary and his positive, uplifting and conscious lyrics.

In 2015, Macka B teamed up with London-based Peckings brothers which resulted in the release of a 15-track album entitled Never Played A 45. The latter became one of the Wolverhampton chanter’s most successful album projects. It contained popular singles like Medical Marijuana Card and the title track Never Played A 45, with the latter now re-appearing in two different remixed versions on this new collaboration project with Peckings Records.

The Gentrification EP not only features DJ JePh’s Drum & Bass Remix of Never Played A 45 (probably not striking a chord with the true reggae fan) and a far more appealing awesome remix of that tune by The Hempolics, but also the 2017 released popular single Cucumba To Di World of which its video became a viral hit. Although already heard so many times it’s still nice to listen to this song. The great title track and opener Gentrification, underpinned by a riddim known from Dennis Brown’s Hot Like A Melting Pot, once again shows what a great lyricist Macka B is. Also Face To Face, in which the veteran chanter talks about the real dancing pon the riddim, comes across a riddim that sounds very familiar to the ears. Next comes Up Ye Mighty Race. This song is a stellar deep roots killer with an awesome bassline that goes on repeat. It’s followed by another clear big winner, Call On Jah, which revisits a classic ska riddim. Just like almost every Macka B effort, this one is just about perfect lyrically… “You got a direct line with the Creator, so you no need to go to no operator.”

If you’re familiar with Macka B and his music, you know what to expect.