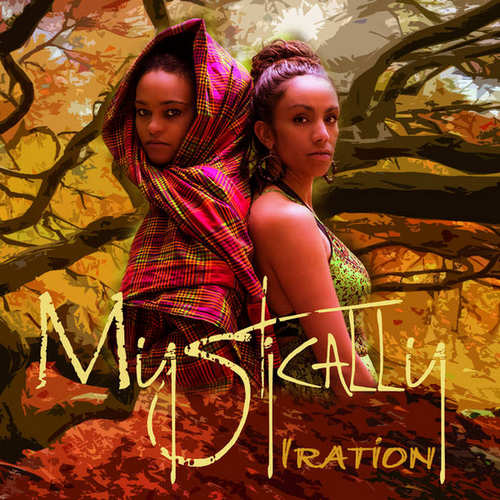 Four years after the release of their debut album Ladie’s Words, The France-based female duo Mystically is back with its sophomore album entitled Iration. Mystically comprises singer & songwriter Marie-Lou Fauconnet and singer Adeline Aurokiom, who both come from a mixed background between Martinique, Congo, and France. They received a very sharp musical education and were influenced by artists like Aretha Franklin, Erikah Badu, Tina Turner, Bob Marley, Stevie Wonder, Johnny Clarke, and many others. Since they entered the music business more than ten years ago they’ve gained a rich experience as chorus girls (in particular with French artists like Benny Joke or Nuttea and have wowed audiences when opening some shows for Alborosie, Asa, or Mo Kalamity.

Listening to the eight tracks that make up this Iration album, it’s clear that both singers’ beautiful voices are the base of this skilfully produced collection of tunes. Besides that, the listener is treated to the warm and subtle backing of the afro-jazz musicians involved in this project. Each track is of significant quality, incorporates infectious energy, and is absolutely delightful to listen to. It actually shows how immense the talent of the vocalists and musicians is. Lyrically the songs, which are full of consciousness, keep you involved throughout. Musically this album offers a modern reggae sound with connections to afro-roots and neo-soul. There’s even a ska-flavored lover’s track, You Stay, that is sure to get you moving in some capacity. The same goes for the splendid message tune One Song, although the guitar part towards the end might not be everyone’s cup of tea. The title track, Iration, is a maturely vibed song that is absolutely a great joy to listen to and so is Heavy Rain. Several songs feature powerful horns play which brings in some extra appeal.

Iration features about thirty-five minutes of strong music, so pretty sure there’s something on this album that any reggae fan is going to enjoy.