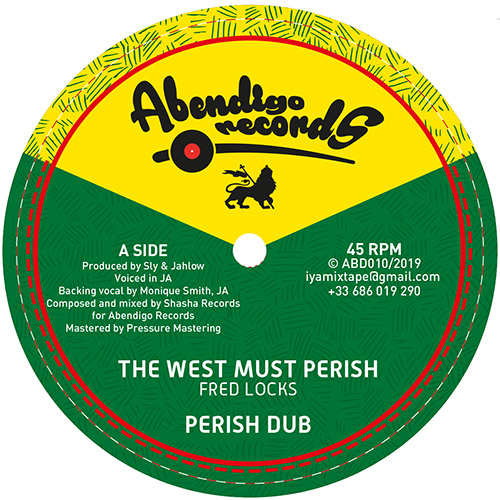 With so many releases being sent, it’s almost inevitable that sometimes some of them unintendedly go overlooked. Luckily they reappear again when you have time to check what you’ve received in recent years. In this case, it’s all about a November 2019 released 12″ vinyl single by Paris-based Roots Reggae & Dub label Abendigo Records. Founded in 2017 by Sly & Jahlow, the label has released mainly 12″ singles featuring mostly tunes by Jamaican veterans like Prince Alla, the late Michael Prophet, Tommy Clarke aka Trevor Clarke, and Earl Sixteen.

Besides the second collaboration with Earl Sixteen, this platter features the first work of producers Sly & Jahlow with Fred Locks, a member of the 12 tribes of Israel who established his name in 1975 with the Black Star Liner single and album. Across a wicked Steppers riddim, he delivers a song about repatriation to the Motherland – a familiar theme in cultural roots reggae. Voiced in Jamaica with Monica Smith providing backing vocals, the roots singer tells the listener about the Western system (i.e. Babylon) coming to an end and his love for Africa. It’s a great roots piece that is accompanied by an equally great dub version. The second cut across the riddim, the superb Africa Is On The Move, has been voiced by Earl Sixteen at the Don Wess studio in Senegal, Africa. It’s a tune with positive lyrics that makes the listener aware of the richness of the African continent. And also here the dub version is worth hearing.

A great vinyl platter which is still available!