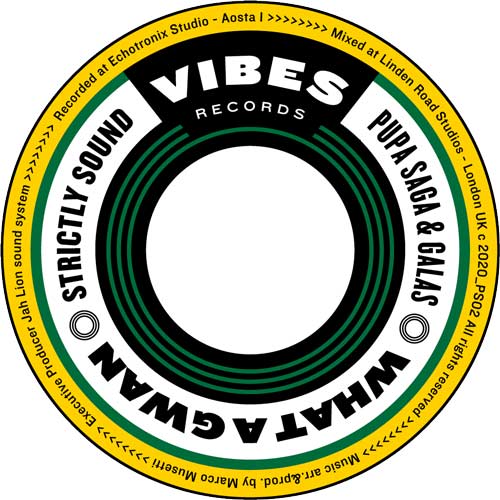 Jah Lion is a roots reggae dub sound system based in Italy. In the late 1990s Luca, selector, and owner of the sound, began spreading the good and meaningful vibes around Italy and further. A few years back he and his mates started the Profound Sound Records label with the release of In This World by Mara, complete with a dub from dub wizard Brizion.

Their new label, Vibes Records, was founded because of the desire to create a sound that differs from the deep roots style of Profound Sound Records, and that is more embedded in the digital sphere, with an emphasis on energy and riddim.

The first feat, the single What A Gwan , is the result of the overwhelming amalgamation of three extremely creative, musical persons. First, we mention Pupa Saga, the veteran MC singer, who has more than earned his spurs in the Italian reggae scene. Then there is Marco Strictly Sound, owner of Sagate Records, who has been operating successfully in the music business for years, and finally the young and talented Galas. He is considered a convincing and promising artist, although he has only been active for a few years.

Already in the first seconds, the song grabs you, with its uptempo and slightly aggressive backing, strictly digital style! The backing is perfect for the relentless flow of conscious lyrics, which are entrusted to the listener in an almost compelling way that cannot be escaped. What a pity that the tune stops after three and a half minutes, this tune just begs for an extended mix on a 12″ single! However, we are somewhat compensated by the B-side in which Marco Strictly Sound covers the songs with a spacy and tasty portion of dub sauce.
Nuff said, play it loud! Please note: Limited edition 7″ single.