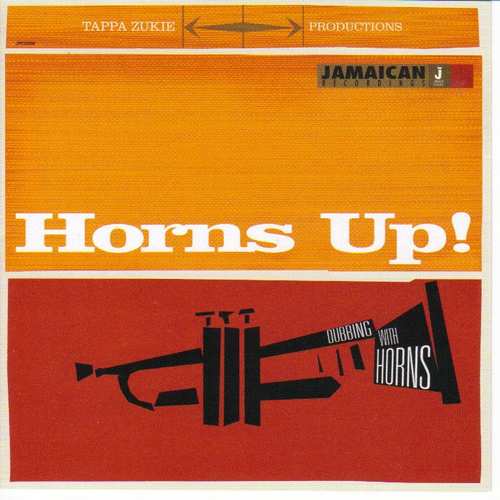 Released in 2009 on CD and LP by Jamaican Recordings, and still available, now the album Horns Up! (Dubbing With Horns) has been reissued as digital download. The UK-based label, set up to distribute authentic 1970s Jamaican reggae & dub music, doesn’t have a good reputation amongst reggae fans. Far too often there was the suspicion that much of the music they released, mostly sourced of producer Bunny ‘Striker’ Lee, has been tampered with prior to its release and that much of the information on their sleeves was incorrect or misleading. are some gems amongst their catalogue, and this latest release is one of them. However, to completely disqualify the label for that isn’t correct as they’ve put out some worthwhile releases including this album from legendary dub producer and artist Tappa Zukie.

Although one can question whether this is really a long lost album, Horns Up! (Dubbing With Horns) is a great instrumental album with tracks recorded at Channel One from 1976-1978. This set features The Aggrovators with horns played by Bobby Ellis (trumpet), Tommy McCook (tenor saxophone), Vin Gordon (trombone), Deadly Headley (trombone), and Lennox Brown (alto saxophone). Basically this album contains the backing tracks of released vocal cuts with the horns largely pushed up in the mix in an attempt to shine a light on these great horn players. However, don’t expect the inclusion of solo parts because they’re not around. These are instrumental cuts to Tappa Zukie produced roots classics such as his own cut to Doreen Schaeffer’s Try A Little Smile, Knowledge’s Bow Down Babylon, Population and Sentry, and Horace Andy’s Natty Dread Ah Weh She Want and Raggamuffin (She Wants Me).

An album with strong jazzy/bluesy instrumentals, all of them worth hearing.