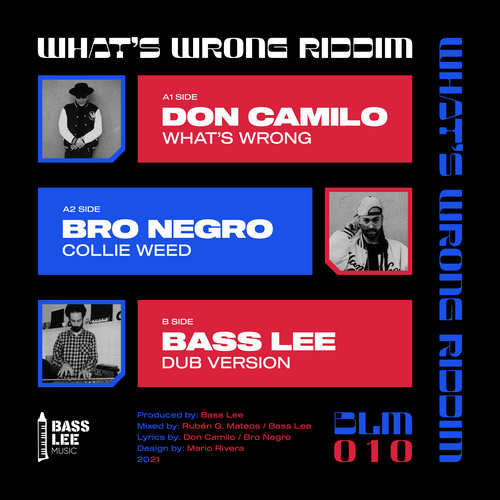 From Bilbao, Spain comes a brand new release by independent reggae label Bass Lee Music, which is founded by producer and musician Bass Lee. Last year the latter drew notable attention with his self-produced melodica album Inna One Drop Style. Issued in digital format on its Bandcamp page, the What’s Wrong Riddim, the label’s tenth release, consists of three versions of the fresh original riddim which has been composed and programmed by Bass Lee himself.

The riddim track harks back to the second half of the 1980s, when Steely & Clevie’s computerized riddims had taken over the Roots Radics dominating role of the preceding period when their sparse and slow riddims ruled the dance halls. The first vocal cut comes from Chile-born singer Don Camilo who has been settled in France for a long time. He’s a singer known for tunes such as Run Come, Youthman, and Kill Them All. Here he performs the superb lead track What’s Wrong utilizing a vocal style that has subtle hints to Tenor Saw. Bro Negro is another Chilean singer, who in contrast with Don Camilo sings in Spanish. Although not everyone will be able to understand his lyrics, he has a nice flow across the riddim that makes his ganja song with backing vocals by Sistah Lore worth hearing after all. The third cut is the wicked dub version mixed by Bass Lee, which more or less is the icing on the cake.

In all, an interesting release for fans of computerized dancehall music.