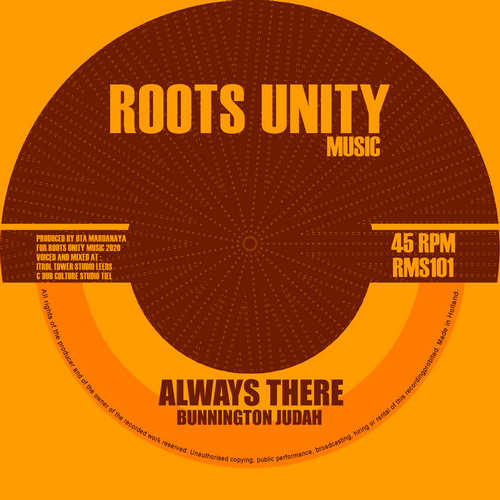 Since Roots Unity Music was founded by Uta Maruanaya in 2018, the Netherlands-based record label that aims to bring reggae fans the best in new original real instruments reggae and dub has managed to attract attention with their releases, most notable with Nga Han’s acclaimed 2020 album The Living Stream: Chapter One. Roots Unity Music’s brand new release, a 10inch vinyl platter, features a track from Bunnington Judah and one from Rapha Pico done in collaboration with the aforementioned Nga Han plus the dub versions.

Veteran Bunnington Judah is a familiar name in the UK Dub Sound System culture due to being a micman for the legendary Leeds-based Iration Steppas. Besides being a singer, songwriter, and lyricist, he’s also a master drummer with a unique style and a Binghi drum specialist. Furthermore, he’s a founding member and drummer of the RAW Rhythm Section, an international studio musician collaboration project that builds riddims at the Earth Works Studio in Amsterdam. So, it was only waiting for the release of a vocal cut by Bunnington Judah that was recorded at that studio, where also Uta Maruanaya works as a musician, engineer, and producer. Bunnington Judah, a singer with an instantly identifiable voice whose known for delivering poignant songs, brings a great roots piece entitled Always There across a wicked bass-driven riddim, that fires on all cylinders when the dub leaps off your speakers. On the flip side the listener is treated to more roots niceness with Rapha Pico and Nga Han, whose vocals blend very well on a song in which they hail up His Imperial Majesty in fine style. And again the dub version is the icing on the cake.

An excellent release from Roots Unity Music that is firmly establishing its name as a quality roots & dub label.