Higher Meditation – On The Way To Zion / Live Good

Higher Meditation – On The Way To Zion / Live Good 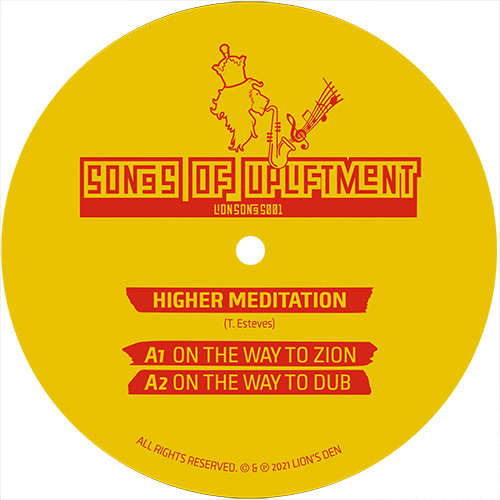 The Berlin-based label, sound system, studio, production, and promotion force Lion’s Den, also known for their fruitful collaboration with Rash Kush’s Brooklyn-based Black Redemption, has launched a new series of instrumental dubwise vibrations called Songs Of Upliftment. The first platter features tracks created and mixed at Vibronics’ Dub Cupboard Studio by Thomas Esteves aka Higher Meditation, who hails from Leicester UK. On his own label and in collaboration with others in the business he released tracks such as Land Of Zebulon, Cyan Take It No More, Chant Down Babylon, King Of Glory, From Near Or Far, Jah Works, and The Message.

And now there’s this 4-track 12inch, which features efforts that are just perfect for roots dances when played on heavyweight sound systems. On the A-side, the listener is treated to the instrumental On The Way To Zion, which evokes a sort of 1990s atmosphere as its uplifting melodies contrast with sharp percussions and fierce tom rolls. Its well-done dub version, On The Way To Dub, will surely excite the dub heads. On the flip side, you’ll find an entertaining fast skank-driven UK Steppers piece called Live Good, which is followed by its decent dub version.

In all, a solid first release in this new Songs Of Upliftment series from Lion’s Den.